The 2022 Prefontaine Classic or Pre Classic returns on Saturday, May 28 and the Nike-sponsored meet is poised to be the first real look at a variety of athletics stars in action for this outdoor season.

Botswana’s Letsile Tebogo, who is also 18, broke Bromell’s World junior record in the 100 meters on the same day Knighton lowered his own to 19.49, running 9.96 on April 30. They both will continue to test their mettle in the senior ranks.

The Pre Classic women’s 200 meters  will be headlined by Shelly-Ann Fraser-Pryce. Bahamian Anthonique Strachan and Jamaican Brittany Brown will try their luck. Switzerland’s Kambundji will double on her 100 efforts, while Americans Jenna Prandini and young Cambrea Sturgis will work to defend home soil.

The Men’s 400-meter hurdles has Olympic silver medalist and second-fastest man ever in the event, Rai Benjamin versus Brazil’s bronze medalist from the Tokyo Games, Alison dos Santos, as well as Jamaican Olympian Kemar Mowatt. 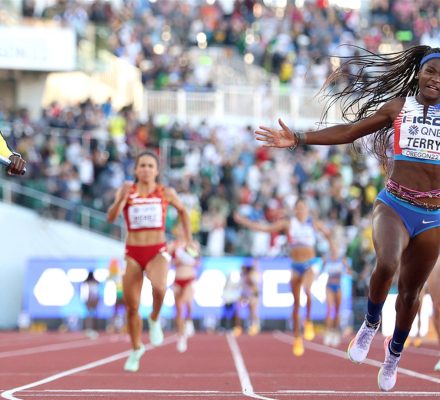