Aside from Armand Duplantis’ world record, the Stockholm Diamond League saw many incredible times, meet records and world Leads, as athletes tuned up their form before the World Championships next month.

The most impressive performance of the meet that wasn’t a 6.16 pole vault, was Brazilian Alison Dos Santos’ 46.80 in the 400m hurdles. This is a new world lead and, of course, a meet record, the sixth-fastest time ever and the first sub-47-second run in 2022.

The Tokyo bronze medalist bested competition like American CJ Allen, who finished 4th at US Nationals and second here in 48.28 and British Virgin Islander and fellow Olympian Kyron McMaster’s 48.58 to give him 3rd place.

“I’m so happy; I’m so proud. I’ve waited for this time a long time this season,“ Dos Santos said.

In the women’s 100-meter hurdles, the Olympic champion Jasmine Camacho Quinn won against a -0.5 headwind and fellow World Championship favorites like Tobi Amusun, Danielle Williams and Nia Ali in 12.46. Nigerian Amusun refinished second in 12.50, and defending world champion Ali got third in 12.53. Williams, fresh off her third-place finish at JAAA trials, got fourth in 12.59. Another Olympic finalist, Bahamian Devynn Charlton, had a 12.65 effort for fifth.

Looking to return to his 2019 form, the men’s javelin throw was won by reigning world champion, Grenadian Anderson Peters, by throwing a 90.31 meters to outgun Indian Olympic breakout performer, Neeraj Chopra (89.94) in a new meet record. He also set a new personal best and national record of 93.07 earlier this season. Chopra’s effort also broke his own Indian record.

In the women’s 200 meters, the finish was a thrilling victory by reigning world champion Dina Asher-Smith of Great Britain, who narrowly edged out Swiss star Mujinga Kambundji by clocking 22.37(22.364) to 22.37(22.367) in her last tune-up race before Eugene.

Denying the crowd a rare sighting of Tokyo’s fastest man, Italian sprinter Lamont Jacobs pulled out at the last minute. This left Olympic finalist Akani Simbine of South Africa to win in 10.02 seconds, with Britain’s Reece Prescod second in 10.15. 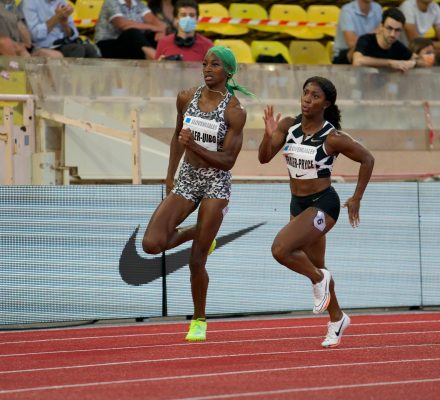