He sliced exactly half a minute off of his previous mark of 2:01:39 set at the same race in 2018.  He won today’s race over another Kenyan, Mark Korir, by nearly five minutes and earned EUR 110,000 in prize money and time bonuses.

Kipchoge, 37, made his intentions clear in the first half of the race.  Instead of the three Kenyan pacemakers –Moses Koech, Noah Kipkemboi, and Philemon Kiplimo– sticking with the planned schedule of running 60:50 through the first half (2:53 per kilometer), they ran 2:49 for the first kilometer and blasted through the halfway mark in an unprecedented 59:51.  It was clear that Kipchoge was trying for the two-hour barrier which has never been broken in a World Athletics-compliant competition.

Remarkably, Kipchoge wasn’t alone at that point.  Beside the three pacers he still had Ethiopian half-marathon specialist Andamlak Belihu on his heels.  Belihu, who has a half-marathon career best of 58:54 but a marathon best of only 2:09:43, looked fairly comfortable.  Defending champion Guye Adola, who was with the leader through 15-K, had already fallen back.  He would eventually drop out after 35 kilometers.

Kiplimo was the final pacemaker to stay with Kipchoge and he hit 25-K in 1:11:08 before immediately stepping off the course. Kipchoge motored ahead, and quickly dropped Belihu.  In a familiar scene from marathons past, it was just Kipchoge against the clock.  He managed to keep his pace under three minutes per kilometer, but with splits like 2:57 for the 27th kilometer and 2:59 for the 28th, the “sub-2:00” attempt was off.  He was beginning to tire.

“We went too fast,” Kipchoge admitted after the race in his broadcast interview.  He added: “Actually, it takes energy from the muscles.”

Although his pace was slipping (he slowed to a 3:08 kilometer in the 38th and 3:11 in the 40th), he rallied in the final 2.195 to lock-in his new World Athletics record.  He was handed a Kenyan flag and celebrated in the finish area much to the delight of the fans.

“I thought, let me try for two hours flat,” Kipchoge said later as he thought about his race.  “I’m happy with my performance.”

Down the finish order, Japan’s Kenya Sonota and Tatsuya Maruyama both got 2024 Japanese Olympic trials automatic qualifiers by running 2:07:50 and 2:07:56, respectively (sub-2:08).  Those trials, called the Marathon Grand Championships, will be held in September, 2023.

Had Kipchoge not broken the world record, the women’s race would have been the big story.  Ethiopia’s Tigist Assefa, a 1:59.24 800m runner who competed in the 2016 Rio Olympics, burned down her previous personal best by nearly 20 minutes and ran a sensational 2:15:37.  That made her the third-fastest woman in history behind only Kenya’s Brigid Kosgei (2:14:04) and Britain’s Paula Radcliffe (2:15:25).  She obliterated the Berlin course record of 2:18:11 set by Gladys Cherono of Kenya in 2018, the same year Kipchoge ran his previous world record.

Second place went to Kenya’s Rosemary Wanjiru, in her debut at the distance: 2:18:00.  That’s mighty fast, but not the world debut record (that still belongs to Ethiopia’s Yalemzerf Yehualaw who ran 2:17:23 in April of this year).  Another Ethiopian, Tigist Abayechew, got third in 2:18:03.  She nearly caught Wanjiru in the final 100 meters of the race.

The woman with the fastest personal best coming into the race, Keira D’Amato of the United States, had a disappointing day (by her own high standards).  The 37 year-old had hoped to break her own North American record of 2:19:12, but felt some cramping mid-race and was forced to briefly walk in the 34th kilometer.  Off of a halfway split of 1:09:27 where she was running in 13th place, she finished sixth in 2:21:48.

“You know today wasn’t my best day ever, but it was the best I could do today,” D’Amato said through a text message sent by her manager, Ray Flynn.  “I’m proud of myself that I fought despite not feeling super great.  But you know, sixth place in Berlin (is) my second-fastest time ever.  You know I’m pretty good with that.”

Today’s race was held in near-perfect conditions with a start-time temperature of 12C/54F and a mix of sun and clouds.  Organizers said that more than 45,000 runners had entered.  Finisher totals will not be available for several more hours. 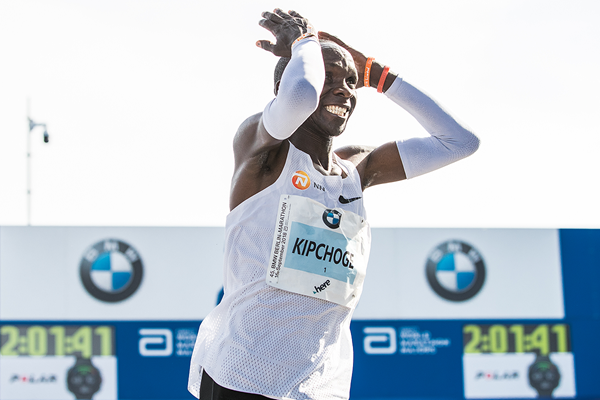 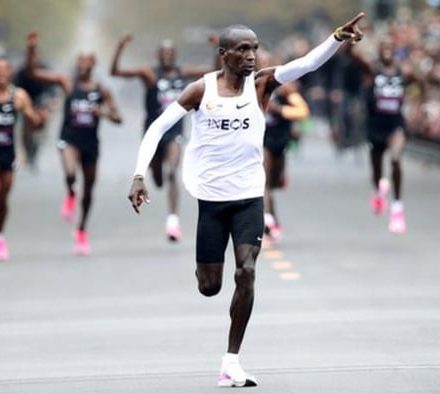