BEIJING, China – With the mighty hurdling country, the USA holding 1-2-3-4-5 in the 100mh ranking for 2015, the coach Lennox Graham-conditioned, pint sized, Danielle Williams, another personal best of 12.58, thrilled Jamaica, at home, abroad and most pointedly here at the XV IAAF World Championships in Beijing, this evening (28 August).

It was instant ecstatic applause and fiery frenzy at the moment she dipped across that finish line, in the gold medal spot. The odds stacked high against the victory and she hailed her personal coach, Kingston College former practitioner, Graham,  and most eloquently her coach at her High school in Jamaica, Lloyd Clarke. Contrary to usual practice, she recalled  her principal of her primary school Kings Gate, “where it all started.” To use her own words.

“Run, run, run” were her only thoughts as expressed in a post race interview, when the gun went and that took her to world championship history, while, focused on the job at hand, staying low as she sped through to the finish line. History?- being part of sibling presence in a global final, similar to the Borlee brothers from Sweden, hitherto. The little miss, who lost her Mom, before she won her first teenage medal at the Queens, must have had to grapple, in these circumstances, with a rocky road, her popular paint company-employed, Dad, constantly in support. She has withstood and triumphed over that challenge in much the same way as she did that which was presented by the hurdles she had to negotiate to be the 2015 world champion in the 100mh. Tons of congratulations are in order for coach Graham, who thanks to some admirable foresight by the Jamaica Federation, was on hand to oversee, her advance to glory, here in the Chinese city.

Despite a valiant run which gave her a fantastic silver medal in a sterling quality lifetime best of 21.66, yet another Stephen Francis product, Elaine Thompson, made the transition from her home district. Banana Ground in Manchester to Beijing in China, to take the silver medal. She came off the corner leading, as she had to, under the sternest of challenges from Dutch woman, Dafne Schippers, the 100m silver medallist. She was in for gold, but at the very last stride, was out leant by Schippers, the 2015 world champion with 21.64 A lot more will be heard of the Mona-based University of Technology student, whose sense of the occasion and a look that ‘’I belong here’’ seemingly increased as the completion moved on.

Let us not forget the great Veronica Campbell-Brown, running tight in the innermost lane used and who added to her gold medal chest (100m in 2007 and 200m in 2011) a bronze, in a season best, 21.97.Sherone Simpson tidied up her welcome re-surface this season with another 2015 topper of 22.50.  World champion is the girl from the Kingdom of the Netherlands, 23 years on her clock, Dafne Schippers – 21.63 world lead and European record, for the gold.

London Olympics bronze medallist, Hansle Parchment, upgraded a notch to silver in the 110mh, tonight. He came from some distance off the lead pack to just edge ahead of USA’s Aries Merrit, 13.03SB to 13.04SB. 21 year old, Omar McLeod, prepared in the high profile USA collegiate program at the University of Arkansas , figured early but after his now trade mark clattering of barriers, faded to 6th in 13.18. More technical work will certainly equip him for a more sustained effort for Rio at Olympics, 2016. The new world champion is Russia’s Sergey Shubenkov who took the gold in a national record, 12.98. Spare a thought and a prayer for the American world record holder and Olympic champion, Aries Merrit, with expansive smiles throughout the competition, as he has kidney transplant surgery in a few days. May he be blessed by the Heavenly Father.

With first day activity completed in the men’s Decathlon, Grenada’s lone Caribbean competitor, Kurt Felix, stood at a creditable 8th position of the 26 entrants with 4338 points. His evening scores came from a 2.10m clearance in the vertical jump for 89 points and in the 400m that ended the day’s jousts, he did 49.89 for 820 points.

Early in the day’s proceedings, the first track event on show, Danielle had progressed by taking heat 1 of the semis in a massive lifetime best of 12.59 and elder sister Shermaine did likewise with 12.86 to advance, Their countrywoman in the black, gold and green, Kimberly Laing did not make it, 5th in heat 2 at 13.30 and Bajan Kierre Beckles joined her as an also ran, 12.90 for 4th in heat 2

Four medals from three events for Jamaica in one post lunch action. Not bad at all, is it? 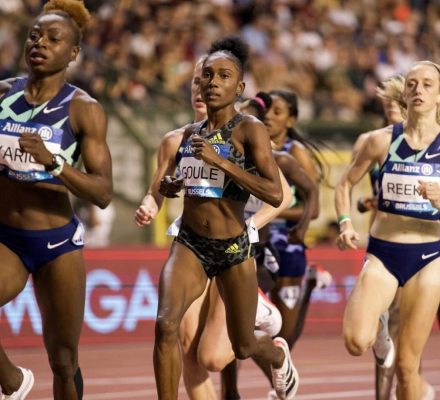