EUGENE, Oregon —— Jamaican Olympic champion Elaine Thompson-Herah has come out swinging in defense of her sprint rival Sha’Carri Richardson after beating the American at the Prefontaine Classic 2022 meeting on Saturday (28).

Thompson-Herah returned to Hayward Field this past weekend to retain her Prefontaine Classic women’s 100m with a late surge in the closing meters en route to clocking an impressive 10.79 seconds (+0.7 m/s) to set a season-best for the victory.

Among the athletes she defeated was USA’s spotlighted sprinter Sha’Carri Richardson, who has been receiving mounting criticisms from several sections of the media and those on social media for being too outspoken.

Sha’Carri Richardson back running and in form

After withdrawing from three meetings in the early stage of the 2022 season, Richardson made her second appearance of the new campaign on Saturday after opening up at the 2022 Duval County Challenge American Track League meeting in Florida, last weekend.

The 22-year-old clock a season-best time of 10.92 seconds to take second place behind Thompson-Herah at the Prefontaine Classic 2022 meeting to improve on the 11.37 secs and 11.27 performances in Duval last week.

Following the race in Eugene, five-time Olympic champion Thompson-Herah told reporters in the mixed zone that despite the rivalry between herself and Richardson, the American sprinter is a “good athlete” and people should give her some breathing space and allow her to perform.

Richardson is the joint sixth-fastest woman in the 100m on the world all-time list with a personal best of 10.72 seconds. The NCAA collegiate record holder has also clocked impressive times of 10.74 secs, 10.75 secs (NCAA record), and 10.77 secs in her career so far.

“She’s a good athlete and I think she’s [making] her way back on the track,” the Jamaican told reporters. “I think you guys should give her some [breathing space] and let her breathe and come on the track and perform.”

Meanwhile, the victory time for Thompson-Herah this weekend saw her dip under the 10.80 seconds barrier for the 100m for the 16th time in her career with legal wind-reading —with six of those times coming during her exceptional 2021 campaign.

The 29-year-old clocked the second-fastest time in history over the 100m when she posted 10.54 seconds to destroy a world-class field at the Prefontaine Classic 2021 meeting after retaining her 100m and 200m titles at the Tokyo Olympics last summer.

The fastest woman alive has five times at 10.70 or faster for the 100m and the Jamaican national record holder even believes that the world record of 10.49 secs, set by USA sprint legendary Florence “Flo-Jo” Griffith-Joyner in 1988, isn’t totally out of reach if she can stay healthy. 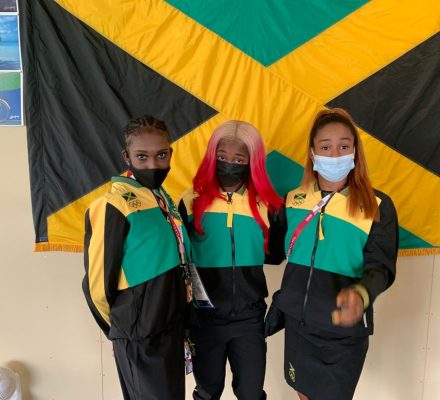