For the second year in a row, Sydney McLaughlin-Levrone broke the 400 meter hurdles world record twice, earning the title of Track and Field News’ “Performance of the Year” for her second record-breaking performance.

The following 14 performances were recognized in our scoring system:

Sydney McLaughlin-Levrone’s 50.68 world record run, 88 points (17 No. 1 votes) This almost perfect performance earned her top votes from all but one panelist, and even the athlete herself admitted that the run was not perfect, saying “We thought we’d be able to go a little bit faster.”

Tobi Amusan’s 12.12 world record, 48 points This unexpected world record in the semifinals at Eugene caught everyone by surprise, including Amusan herself who said “I could not believe it when I saw it on the screen. But it was just a matter of time.” She later went on to confirm the record with a 12.06 in the final, which placed 6th in our rankings.

Yulimar Rojas’s 51-7¾ (15.74) jump, 47 points (1 No. 1 vote) Rojas, known as the queen of the triple jump, saved her best performance for the final round at the World Indoor Championships in Belgrade, setting a new best-ever record indoors or out. One panelist even ranked it as the No. 1 Performance of the Year, with 16 out of 18 awarding it points.

Shericka Jackson’s 21.45 run, 40 points Jackson, a Jamaican runner, has been performing well for years, but this year she truly shone with a blazing 21.45 run that broke the World Championships meet record and came close to breaking Flojo’s 34-year-old record of 21.34.

Faith Kipyegon’s 3:50.37 run, 16 points The Olympic and World Champion in the 1500 meter added another honor to her collection with this personal best run, though she fell just short of Genzebe Dibaba’s 2015 world record by 0.3 seconds.

Other performances that received votes: 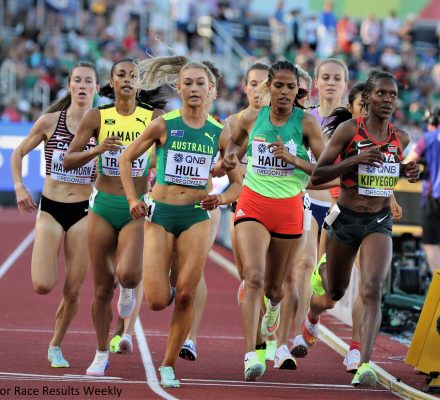