The leading Caribbean and in fact, the 110mh world leader in time and reputation, Omar McLeod delivered at the World Championships at the Olympic Park in London today, taking the gold medal in his event in 13.04 seconds.

All the speculation as to whether the Jamaican was in top shape, came to an abrupt end, when he smoked out of the blocks and held his composure against a stiff challenge from the defending champion, Russia’s Sergey Shubenkov who took the silver in 13.14. Bronze went to Hungary’s Balazs Baji with 13.28. 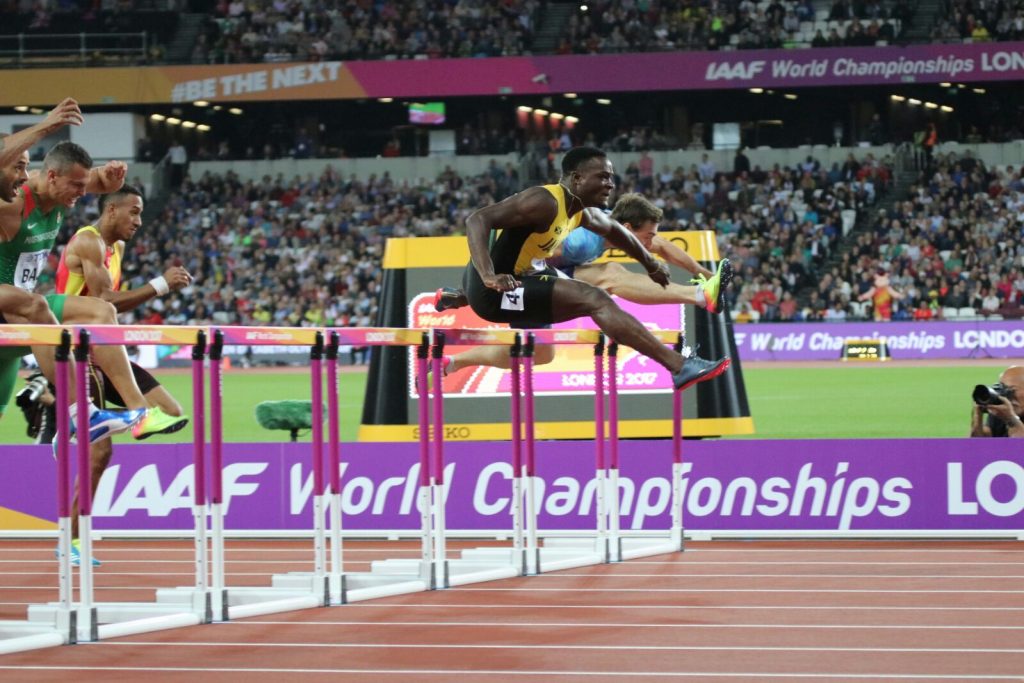 He had atoned for a projected medal count for his country that was going astray and told the media after, “I did it for the Jamaican camp……..I did it my way………I shine the Omar McLeod way.”

Barbados’ Shane Brathwaite was 6th in 13.32 and McLeod’s teammate., Hansle Parchment, 8th with 13.37
Jamaica’s triple jump finalists, Shanieka Ricketts and Kimberly Williams were 8th and 10th with respective distances of 14.13m and 14.01m.

The world champion is Venezuela’s Yulimar Rojas with 14.91m, battling all the way to the wire with many time gold medallist, Caterine Ibarguen of Colombia whose longest jump was 14.89.

There were a number of qualifiers earlier in the afternoon session which were of deep interest to the Caribbean people. First was the men’s 200m. Anyone who hitherto was unaware of Jereem Richards of Trinidad & Tobago, that is now changed. From lane one, he sped to a round leading time of 20.05 to pocket the second heat. Others from the region to advance to Wednesday’s semifinals, are 100m fourth placer, Jamaica’s Yohan Blake, 1st in heat one, 20.39, Richards’ teammate Kyle Greau, 2nd in heat five, 20.48, and Rasheed Dwyer, 3rd in heat two, 20.49.

In the 400mh women, Jamaica’s world championships four-timer, Ristananna Tracey turned around her recent lackluster form to make the advancing ladder in second ranking by taking heat three in 54.92. Coached by Maurice Wilson who is the head coach in London, she inspired her Sprintec clubmate, Rhonda Whyte, to a 7th ranked 55.18 to place 2nd in heat five. Also going through, were Trini lass, Sparkle McKnight, 55.46 for 4th in heat one and US-based, Jamaican, Leah Nugent, 56.16 for 5th in heat one.

In the semifinals of the men’s 400mh, Jamaican Kemar Mowatt took advantage of the fastest heat to register the only finals qualifier among the three from his country and by extension, the region, at this stage. He ran 48.66 for 4th and was in 7th spot in the rankings.

Four Caribbean Girls made the final cut in the 400m event to be staged to close Wednesday’s program. . Topping the lot at 3rd ranked overall, was the Bahamian, Shaunae Miller-Uibo, 50.36 for the win in the first heat. Three Jamaicans occupied the 5th, 7th and 8th ranking positions, Stephenie Ann McPherson with 50.56 a season best and Novlene Williams-Mills, 50.67 and Shericka Jackson, 50.70.

There was no luck for Olympian Clive Pullen in the men’s triple jump as a pedestrian effort of 15.61 left him at the back of the competing pack.