Noah Lyles soared to an astounding American Record of 19.31 seconds, defending his 200-meter title as the leader of a fast red, white and blue sweep.

The American’s time was a bit more than a tenth of a second off the world record set by Usain Bolt in 2009 and a hundredth better than the American record of 19.32 seconds set by Michael Johnson in another USA-based global championship at the 1996 Olympics in Atlanta. This makes Lyles the third fastest man in event history, only behind Bolt (19.19) and fellow Jamaican Yohan Blake (19.26).

Noah Lyles stormed off the curve with a clear lead of at least a meter on the straightaway as he improved upon his advantage with his compatriots in tow. Once he crossed the line and saw he’d claimed another gold and sprinting history, he tore off his uniform in exhilarating triumph.

“I was truly in form for a world record, but I am okay with the American record. I felt I got the best start I could possibly ask for,” said Lyles. “The race was basically set up for me. I was given lane six, an outside lane. To be honest, every step was purposeful, going out with the intent to win. I’ve given my all. I literally had nothing left after I crossed the finish line. It’s an immaculate feeling to be on the podium with two fellow Americans,” Lyles added.

In second was Tokyo silver medalist Kenneth Bednarek (19.77), while teenage sprint prodigy Erriyon Knighton settled for bronze in 19.80. This gives USATF its second sweep of the meet on the track and third overall, including the men’s shot put.

This is the ninth time the Stars and Stripes have taken home 200-meter gold in World Championship history and the second sweep (2005 was the first). 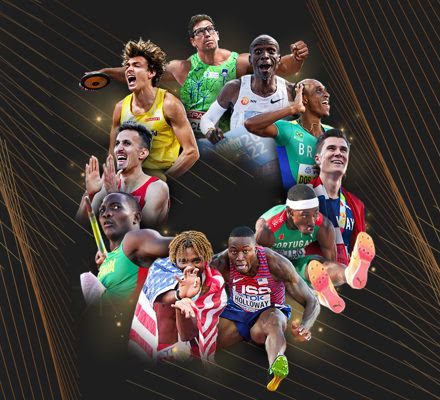