Tobi Amusan sped to a 12.12 (0.9m/s) clocking in her semifinal to break the world 100m hurdles record at the World Athletics Championships Oregon22 on Sunday (24).

The Nigerian had set an African record of 12.40 on Saturday to win her heat, the fastest first-round time in World Championships history. But even so, few would have predicted that the 25-year-old was in form to challenge the world record of 12.20 set by USA’s Kendra Harrison in 2016.

“I wanted to get out and go,” said Amusan, who is coached by former Jamaican hurdler Lacena Golding-Clarke. “I did what I had to do. Now I’m looking forward to the finals.”

Harrison, who was also in Amusan’s heat, finished second in 12.27, the third-fastest time of her career, and 2015 world champion Danielle Williams was third in 12.41. Five of the eight athletes set lifetime bests, with Cindy Sember clocking a British record of 12.50, Michelle Jenneke of Australia running 12.66 in fifth and Ditaji Kambundji recording 12.70 in sixth.

Amusan’s mark is only the 4th world record set in the women’s 100-metre hurdles in a heat or semi-final, and the 1st such record in 36 years. The other two were set in the embryonic days of the event, back in 1969, just when the women were moving up from the 80-metre hurdles.

Harrison’s time of 12.27 behind Amusan is still the 11th fastest performance of all time.

Brittney Anderson (JAM) won heat 3 in 12.31, which makes her the 9th fastest performer of all time. 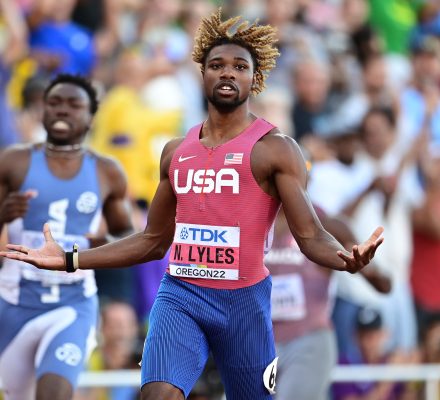