By David Monti, @d9monti
(c) 2022 Race Results Weekly, all rights reserved with permission to use

The 21 year-old, who won the 5000m title just two nights ago, shattered the existing record of 3:35.27 set by Spaniard Fermin Cacho way back in 1994 in Helsinki.  He has now won both the 1500m and 5000m at two consecutive European Championships.

“I felt I have this speed in my legs today so I wanted to go fast from the beginning,” Ingebrigtsen told the European Athletics’ flash quotes team.  “I wanted to have a fast race, and I wanted to win.”

Ingebrigtsen made his intentions clear when he sprinted hard from the starter’s gun and settled in along the rail with Great Britain’s Jake Heyward and Spain’s Mario Garcia Romo a few steps behind.  He went through the first 400 meters in a swift 56.4 seconds, which stretched out the field, and he felt a surge of motivation from the crowd.

“When I heard the great home crowd cheering for us, and I also saw so many Norwegian flags in the stands, it was a great motivation for me today,” he said.  “The fans here are just awesome.”

With the track glistening from a thunderstorm which delayed the meet by about half an hour, Ingebrigtsen split 800m in 1:54.2 and Heyward and Garcia were left to battle it out for silver.  At the bell, Garcia was ahead of his British rival, but in the homestretch Heyward passed Garcia to capture silver in 3:34.44.

“I think it’s just about being patient,” Heyward said.  “I wanted to push Jakob today, that’s why I ran faster in the beginning.”

Garcia, whose legs were surely tired from both the long NCAA season and the World Athletics Championships last month, was able to hold off a final charge by Italy’s Pietro Arese.  The Spaniard was clocked in 3:34.88 to Arese’s 3:35-flat.  Garcia was thrilled with his medal after taking fourth at the World Athletics Championships, and hopes to move up to Ingebrigtsen’s level as he develops under new coach Dathan Ritzenhein at the On Athletics Club.

“I don’t think there is anything I could have done to stop Jakob from winning the gold medal,” he said.  “He is the best in the world right now, and the rest of us are just not able to be at that level for now. The good thing is that I have him as a reference now, and I can plan my work around it, to improve in the next years.”

Germany’s Konstanze Klosterhalfen prevailed over Turkey’s Yasemin Can in a thrilling women’s 5000m final much to the delight of the mostly German crowd.  The U.S.-based Klosterhalfen, who runs for the Nike Union Athletics Club, patiently stalked Can after she surged ahead with about six laps to go in the 12 and one-half lap race.  Instead of sprinting to catch Can, Klosterhalfen worked with Britain’s Eilish McColgan for four laps before pulling up to the Turk on the backstretch with 650 meters left in the race.  The crowd went wild as she passed her.

“The audience carried me so much,” said Klosterhalfen, who was clocked in 14:50.47 at the finish.

Can, who won the 10,000m three nights ago, quickly changed to a defensive posture and worked on holding second place.  She had a comfortable lead over McColgan, and got silver in 14:56.91.  McColgan took bronze –she also won silver in the 10,000m here– and willed herself over the line in 14:59.34.  She was spent after running both the 5000m and 10,000m at the World Athletics Championships, Commonwealth Games, and here at the European Athletics Championships this summer.

“I had nothing else to give (on) very tired legs,” McColgan told reporters.  “I ran those last two laps just hanging on, ‘I want the bronze, I want the bronze.’  I came into this year with just one outdoor medal and I just added four.  I can’t even describe what that means.”

Reigning World Athletics 1500m champion Jake Wightman led all qualifiers in the first round of the men’s 800m.  Wightman, 28, pushed to the lead of the first of four heats on the backstretch of the second lap, held his advantage through the turn, and ran home confidently to win in 1:45.94.  Italy’s Simone Barontini mounted a strong final sprint to finish a close second in 1:45.98.  In all four heats, only Wightman and Barontini ran sub-1:46.

“It is what I needed to do,” Wightman said.  “I didn’t intend on winning it, but I thought that was the most comfortable way of getting through.”

Keely Hodgkinson, the 2022 World Athletics Championships silver medalist advanced easily to the semi-finals in the women’s 800m.  The 20 year-old Englishwoman led the second of four heats through 400 meters in a slow 63.2 seconds, but none of her rivals attacked her. She maintained control at the front as the pace picked up in the second lap and won in an energy-saving 2:03.72 over Poland’s Angelika Sarna.  Behind her, Finland’s Sara Kuivisto rallied in the homestretch to come from fifth place to third in the final 50 meters.  All three women advanced to the semi-finals.

Hodgkinson’s British Athletics teammate, Jemma Reekie, also advanced comfortably winning the fourth and final heat in 2:02.36 over Poland’s Anna Wielgosz.  Germany’s Christina Herring, spurred on by the home-country crowd, fought through tying-up in the homestretch and finished third to advance.

One medal hopeful who did not make it into the semi-finals was Slovenia’s Anita Horvat.  The former 400-meter runner, who finished seventh in the World Athletics Championships in Eugene last month, fell coming out of the final bend and finished last in 2:23.76.

In women’s steeplechase qualifying, there were no surprises.  In the first of two heats, Albanian stalwart Luisa Gega controlled the race from the gun.  By 2000m (6:25.5), she was running alone and looking comfortable.  Although she was caught by Turkey’s Tugba Guvenc and Poland’s Alija Konieczek with about 200 meters to go, she still won in 9:30.93, about one second ahead of Guvenc.  Konieczek took third in 9:33.54 and Great Britain’s Aimee Pratt was a distant fourth in 9:39.22.  All four athletes qualified for Saturday’s final.

In the second heat, Germany’s Lea Meyer led nearly the entire race, much to the delight of the crowd at Olympic Stadium.  She went on to win in 9:39.55 bringing Israel’s Adva Cohen (formerly of the University of New Mexico) and Britain’s Lizzie Bird along behind her in second and third, respectively.  All three women advanced to the final.  Slovenia’s Marusa Mismas Zrimsek (personal best of 9:14.84) finished a distant eighth in 9:46.06, but advanced on time. 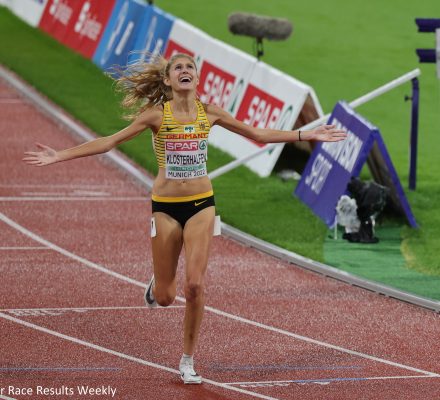