Natoya Goule came close to quit track and field in 2017. She was frustrated by below-par performances. A year later, she is Jamaica’s fastest ever 800m athlete.

Goule explained her journey in an interview with IAAF.

“My low moment arrived in 2017 after I stepped off the track at the Boston Games and threatened to walk away from the sport.

The previous year (2016) had been a rough year for me. I struggled throughout the indoor season, running 2:08 in the heats at the World Indoor Championships. I was sleeping every day until noon and wondered what was wrong with me. I was diagnosed as having an iron deficiency. I was put on iron deficiency supplements to help fix the problem.

“The problems continued in 2017 both on and off the track. I was performing poorly and after running 2:02 to place seventh at the Boston Games, I was so devastated, I said, I’m done with track. I was in great shape, but I could barely run two minutes.

Goule, who broke the Jamaican 800m record twice this season, said sprint coach Lance Brauman encouraged her not to give up.

“He told me that everything would be okay,” said Goule, while adding she was glad not to carry out her wish.

Goule also spoke of the support she received from Trinidadian 400m sprinter Jovan Toppin.
“My friends and family also helped rebuild my confidence, and I successfully returned to the track.”

She took silver at the just concluded NACAC Championships in Toronto.

Goule also spoke of her high moments in this IAAF story
“My high moment came in Monaco earlier this year when I ran my PB and national record of 1:56.15. I’d been through a lot, so to run 1:56 was super amazing. 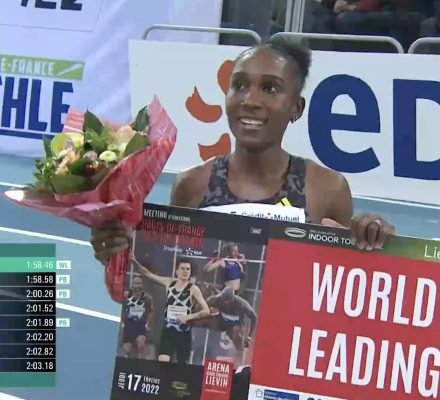