The US trials are set to be held in Eugene between June 23-26. Here are some of the favourites for the most anticipated events on the men’s side, according to Track and Field News website:

As always, the 100 meters contains a lot of intrigue. Although the reigning world champion Christian Coleman will probably opt out of the trials, the reigning US champion Trayvon Bromell is looking to make up for not qualifying for the Olympic finals last year. Then there is Mr. Versatility Fred Kerley, the all-around sprinter who has famously broken the 44, 20 and 10-second barriers, is looking to upgrade his silver medal from Tokyo to gold in Eugene. In order to do that, he needs to finish in the top three at trials on the same track this coming week.

The leading favourite right now for the 100 meters is collegiate star Micah Williams of Oregon. Nicknamed the “Quad god”, he relies on his incredible quadriceps strength considering his short stature. He is the co-second fastest person in the world this year, tied with another 21-year-old in Oblique Seville at 9.86 behind Kenyan sprinter Ferdinand Omanyala.

Ronnie Baker should also factor into the landscape, given their 9.8-second pedigrees – possibly even 200-meter specialist Noah Lyles and young Erriyon Knighton.

Speaking of the 200 meters, It’s anyone’s guess, not that there aren’t obvious favourites on paper.

READ WOMEN TO WATCH: Heat all over the track for US Trials

In reality, I wouldn’t be surprised if anyone from Lyles, Kerley, to Knighton won trials this year and therefore be the immediate favourite for Worlds. Noah Lyles just ran 19.61 on Sunday at the NYC Grand Prix, just weeks after his 19.7 season opener. That time alone, which is still over a tenth slower than his 19.50 personal best, is eighth all-time.

However, the fact an 18-year-old high school graduate from Florida ran 19.49 in April, numbs us to Lyles’ fast start. For all we know, Michael Norman, who has run 19.8 this season, drops down and attempts the double the way he’s looked. Lyles, being the reigning world champion from Doha probably opts out.

Then we have Kenny Bednarek who finished the fastest of those wearing the red, white and blue in Tokyo with his 19.68 personal best for silver.

You also have to look out for Isaiah Young, Terrance Laird and collegian Matthew Boling who has run 19.92 to put up positioning in the championships.

Speaking of Norman, he is clearly the favourite again for the lap sprint. The reigning US Champion is looking like his 2019 self, clocking 43.61 seconds at Prefontaine, by far the fastest time of the year.

He is looking to finally get on the podium at a global championship, being also someone in the sub-10/20/44 club and finally looks to validate his talent with hardware. On his heels will be collegian Randolph Ross who is the two-time NCAA champion and has a personal record of 43.85. “Mr.44” Michael Cherry should challenge but might exercise his Diamond League bye to Eugene anyway.

The men’s 800 is pretty straightforward, with a healthy Donovan Brazier, Clayton Murphy, Bryce Hoppel and Isaiah Jewett likely qualifying the USA as they look to get four into the 800-meter final, as Brazier looks to utilize his bye as well to get an edge for his title defense. Collegian Brandon Miller of Texas A&M will likely factor into this as well if one of the top four favourites has a hiccup.

Not as automatic is the men’s 110-meter hurdles, where Grant Holloway gets a bye from his Doha title, leaving the door open for a fourth person to join him. Devon Allen (the favourite to win it all) and collegian Trey Cunningham could also go head to head with likes of Omar McLeod, Hansel Parchment, the last two Olympic champions respectively. The world record could be in jeopardy before this US championship meet is through, however, given the results of the last week or two.

The 400-meter hurdles is seemingly Rai Benjamin’s to lose as his main threats are coming from Norway, Brazil, Qatar and possibly Estonia this season (as Olympic finalist Rasmus Magi looks to be in peak shape with a 47.82 for number-three ranking in the world). He is the second-fastest 400-meter hurdler in history (46.17) and this year (47.49) seems to be sitting pretty in his path back to Eugene in July if he executes his first time in June.

LSU’s young prodigy and World junior record-holder Sean Burrell (47.85), who is the two-time NCAA champion, will have to summon something even greater if he has any shout in mounting an upset bid.

On the field-events spectrum, the long and high jump will be headlined by Jamaican-rooted JuVaughn Harrison who is the reigning US champ in both events. The young professional picked up immediately after finishing his stellar career for LSU of four NCAA titles, to jumping 2.33 meters in the high jump and a 8.47-m personal best in the long jump to win the trials last season and become the first American since Jim Thorpe to compete in both events at the same Olympics.

In the long jump, he will have veterans like Marquis Dendy to contend with, along with the likes of 2012 Olympic champion Erik Kynard in the high jump, an event which entails newer jumpers on the scene like Shelby McEwen who has shown a knack for making US teams, having qualified for Doha and Tokyo in a 2.30.

Until further notice, the triple jump is still Will Claye’s to lose, as he attempts to finally get his gold medal at major global championships after a string of lesser podium finishes.

Despite his shortcomings, this past indoor season, the shot put is still the two-time Olympic and reigning US champion and world-record holder (at 23.37 meters) Ryan Crouser’s to lose. It still won’t be a cakewalk to repeat, however, since his closest domestic competition, Joe Kovacs, is the reigning world champion, a man he probably won’t see again until July, as Kovacs will use his bye. 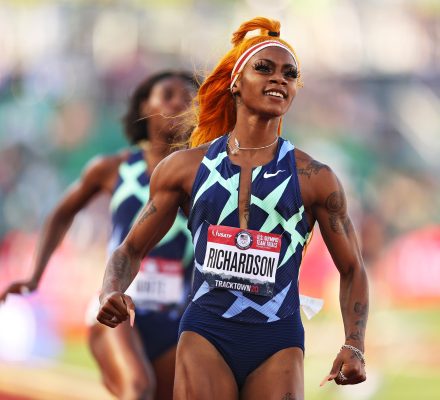