The 7th staging of the UTECH Classic got off to a record breaking start. Records tumbled as the first event got on the way.

The 4 x100m relay set things off for the afternoon proceedings. There were 6 sections for the relays, men, women, boys and girls for High Schools, followed by Prep and Primary Schools together.

The 4x100m for women was first up with a twist. Edwin Allen asked to be placed in the event as they were going after the world High School record. Vere Technical had that record of 44.13 done in 2009. The race was won by MVP, second was a close Edwin Allen, Utech came third. All teams got records, they all went under 44 seconds. Edwin Allen is now the fastest High School in the world with 43.95sec for the 4x100m.

The men's 4x100m record went also, both Racers and Utech with times of 38.41 and 38.42 respectively went under the record set by MVP in 2009 of 38.46. Racers team was Mario Forsythe, Michael Frater, Warren Weir and Yohan Blake.

"We did not practice for this event, and the changes were not good, but we are still happy for the win," said Blake, who was injured at this meet a year ago.
Weir returned to false start in the men's 100m.

The boy's equivalent contributed much excitement, St Jago lead all the way, but fumbled the baton on the final change over, similarly done at the last Gibson Relays. The experts quipped, "the best place for St Jago to get things right will be the Penn Relays."

Next in line was Hurdles, a smart early season 55.64 run by Ristanana Tracey of Racers was enough to remove the record set by Keliese Spencer of MVP 56.32 held since 2009. Janieve Russell gave chase up to 350 meters, but faded with a 57.27 run.

Christine Day of MVP with 51.43 and Annastacia Leroy from Sprint Tech, who did 51.51, extracted their own excitement as they battled from start to finish in the women's 400m dash.

The Women 100 Meter Dash Invitational was taken with a powerful run from Carrie Russell of MVP doing 11.19, followed by Schillonie Calvert of Racers 11.36. Invitational men 100m was won by Jason Livermore, he did 10.25, close for second with the same time was Andrew Hinds of MVP.

The ever improving Stephenie Mcpherson of MVP ran well to take the 200M in 22.93. Utech Natasha Morrison was second doing 23.31, also 3rd went to Kerron Stewart of Racers in 23.64.

Nester Carter from the MVP camp did enough with 20.54 to hold off a persistent Julian Forte, Forte's time was 20.65.

The meet ended with some exciting relays. Calabar and STETHS rhad a ding dong battle for the High School mile relay, in the end Calabar took the race with a record run of 3:10.61, held by Munro 3:10.66. 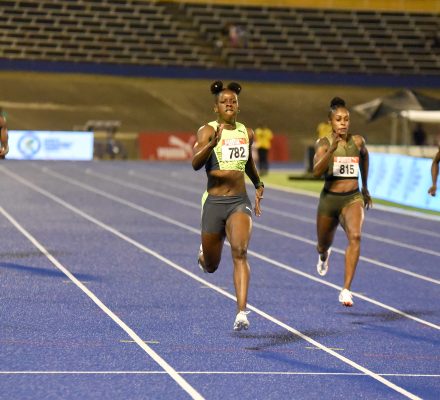