As the curtain came down on the Velocity Fest Meet series, at the Jamaica College stadium on Saturday (25), Olympic sprint double champion Elaine Thompson-Herah signed off with an impressive run.

Thompson-Herah, who has endured Achilles problems since her Rio success, showed no signs of discomfort as she pushed firmly out of the blocks before accelerating away from the field to register a commanding win in 10.73 seconds (+3.0 m/s). This was her second consecutive win over the distance after cruising to 11.19 (-0.6 m/s) the previous weekend.

In the men’s equivalent, Julian Forte, aided by a slight tailwind, chalked up his second victory in a week when he outclassed Yohan Blake. Forte burst the tape in 9.96 seconds (+2.1 m/s) with Blake further back in 10.07.

World Championships bronze medallist Shericka Jackson covered her one-lap specialty in 51.81 seconds ahead of teammate Stephenie-Ann McPherson 52.72. Janieve Russell was the quickest over the distance with a season’s best 51.67 seconds exactly a second ahead of Rushell Clayton, who was a distant runner-up. Veteran quarter-miler Rusheen McDonald in his season opener logged 46.10 seconds.

Bahamian sprinter Anthonique Strachan continued to show signs of gradual improvement when she won the women’s 200m in 22.72 seconds (+2.0 m/s). It was the second-fastest time since 2015 for the 2012 World U-20 champion when she ran 22.69 at a Diamond League meeting in Doha. 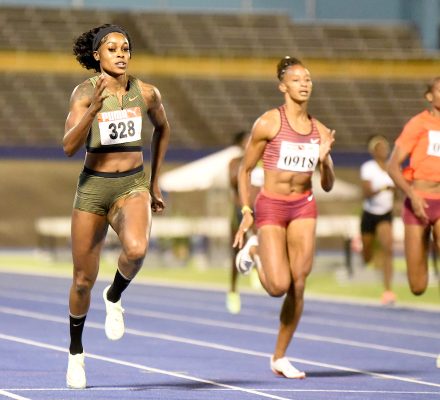