KINGSTON, Jamaica — Asafa Powell and Yohan Blake have been drawn together in the same quarter-finals heat at the Jamaican National Senior Championships on Thursday night.

The heats were announced, following this morning’s qualifying round, which saw seven athletes moving on to the next stage.

Powell will start from lane five in quarter-finals one, with Blake, who is returning from a hamstring injury that forced him to do surgery last season, starting in lane seven.

Kemarley Brown and Kimmari Roach are also listed in the first heat.

Jermaine Hamilton, the fastest runner from the qualifying round Thursday morning, will join Carter in the heat, along with former national champion Oshane Bailey and Marvin Anderson.

A loaded quarter-finals heat 3 will see Kemar Bailey-Cole, Julian Forte and Andrew Fisher all facing-off in an early test.

Forte and Fisher are two of the strong contenders for places on the Jamaica World Championships team to Beijing, China, later this summer, while Commonwealth Games champions Bailey-Cole is hoping to prove his critics wrong.

Another notable name in this quarter-final heat is Michael Frater, a key member of the Jamaica 4x100m relay teams at the 2008 and 2012 Olympic Games.

Nickel Ashmeade leads the starters in the fourth and last quarter-finals.

The newly found Elaine Thompson will start in the second heat and she will have Schillonie Calvert and Chanice Bonner as company. 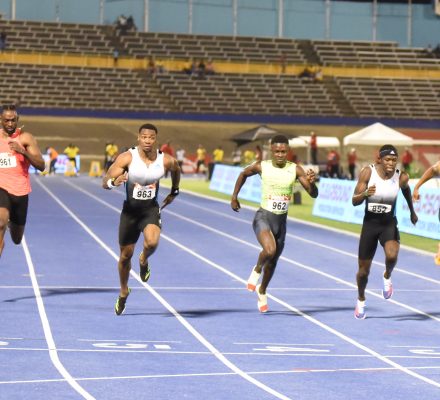