Jamaican Hansle Parchment will take on Orlando Ortega and Sergey Shubenkov over 110m hurdles at the 37th FBK Games in Hengelo, Netherland.

The IAAF World Challenge meeting, which will have 11 events, is using “Dutch stars against World opposition, total experience and more concentration on each event” as their main theme.

Plans are also in place to offer a lot of activities around the stadium. After the opening hour of track action, a spectacular music show will be held before going into the main athletics programme.

Homegirl Dafne Schippers in women 200m and Isaac Makwala in the men’s equivalent are the headliners.

Shakima Wimbley heads the women’s 400m while Abdelilah Haroun and Christian Taylor battle in the men’s one lap event.

American Dawn Harper-Nelson is down for the 100m hurdles.

Elsewhere, after improving her 1500m PB to 4:11.96 in Loughborough on Sunday, European U20 champion Jemma Reekie is targeting the qualifying time for the European Championships in Berlin this summer.

“The European Championship qualifying time is a tough one (4:07.00) and the event in Britain is quite stacked – but I just have to try and aim high. I have to see if I can chip away at my PB, get under 4.10 and then see if I can take it on further from there,” she said.

Also, Christina Schwanitz’s coach Sven Lang has been surprised by the progress the reigning European champion has made since returning from maternity leave, informs Leichtathletik.de.

“When we started training in January, I did not think that Christina would reach 19.50m again in May,” he said.

Schwanitz extended her European leading mark to 19.50m in Gelenau yesterday. “It was a very stable series and again a step forward that will now get better week by week.” 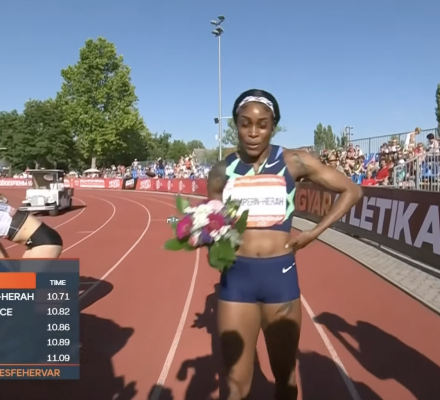