By Dwayne Extol, Special to Trackalerts.com

Bloomfield, who holds a personal best of 44.93 seconds set at the 2015 ISSA Boys’ & Girls Championship, has opted to contest the 200m on the heels of clocking a personal best of 20.66 seconds at a JAAA All-Comers meet. His time currently ranks at 10th in the world on the junior list which is led by Botswana’s Baboloki Thebe with 20.21A.

However, a highly placed source has revealed Bloomfield’s intention of mixing it up with the seniors at the National Senior Trials set for June 30 – July 3rd. There, he will contest the 400m with intentions of securing a spot to the Olympics in Rio.

Neil Harrison, head coach of Kingston College and the man responsible for Bloomfield’s preparation, has confirmed Bloomfield’s participation at both meets and has expressed confidence in Bloomfield’s ability to compete well in both events.

“He is in good shape,” said Harrison, “the decision for him to compete in the 200m at the Junior Trials was basically a compromise between myself and Akeem. He has not run a competitive 200m in two years, so he wants to put himself to the test.”

When asked about the clash which was expected to materialize between Bloomfield and Taylor, Harrison said, “there is no dodging, Akeem will compete in the 400m at the senior trials against the big boys, so all questions can be answered then.”

“I feel fit and ready,” said Bloomfield, “after the personal best in the 200m I am confident I have the ability to run fast this weekend. As for the 400m, the senior trials will be a great test of my abilities.”

Taylor, who clocked a season’s best 45.66 at the Racers Grand Prix, will be seeking to add the world junior title to his resume, as his time has moved him up to the 8th fastest junior over the distance for 2016 – Baboloki is also the event leader with 44.22A. The reigning World Youth Champion will also face tough competition from Qatar’s 2016 World Indoor silver medallist Abdalelah Haroun, who boasts a season’s best of 44.91 done in Doha – Haroun also has a personal best of 44.27 done in 2015.

Bloomfield and Taylor have only raced over a mile relay leg with Taylor overhauling Bloomfield in the homestretch, which has undoubtedly left fans desirous of the matchup between the two most talented Jamaican juniors over 400m for the past two seasons. 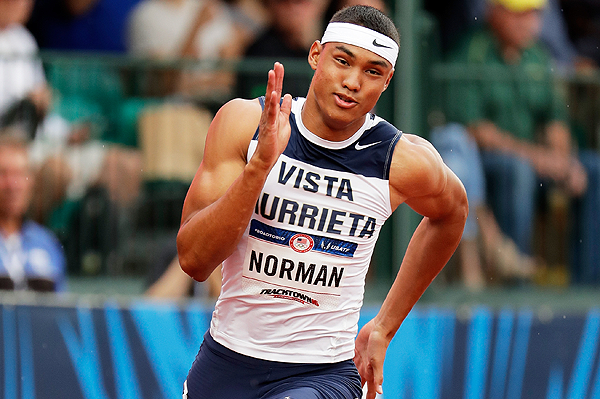