The stage was set and all the likely scripts written for the final individual international race for the farewell to the giant of world sprinting, the man who has achieved legendary status in the sport and brought great joy to his fans the world over. He proved that he was indeed human. 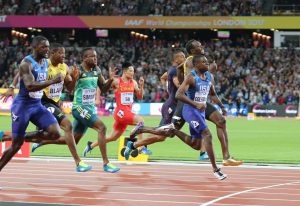 Dogged by his traditional unimpressive start, he tried his usual mid race surge for supremacy, but it was too much to ask of the several time champion and his equal season best of 9.95 translated to an unaccustomed bronze with the American duo of Justin Gatlin and Christian Coleman going 1:2 at 9.92 (SB) and 9.94, respectively. Bolt’s Racers track Club mate was 4th in 9.99. It was the end of a sparkling journey and the mammoth crowd in attendance, with a heavy Jamaican input, celebrated with adulation and aplomb for which the great one has labored and so richly deserves.

He spoke to the media after the race. “”This place is wonderful and I appreciate this crowd so much. “It is just one of those things. Thank you to London for all your love and appreciation” Continuing about his bad start, he lamented, “”My start is killing me. Normally it gets better during the rounds but it didn’t come together. And that is what killed me. I felt it was there.”

With a leg in the 4x100m relay, predictably in both rounds, still to come, he ended, not failing to express his feelings about the result first and the crowd support. “, “”It was rough. A little bit stressed. But I came out like at any other championships and I did my best. Thanks for the support. I could never expect this from any other crowd. They are what pushed me to do my best. I’m just disappointed I couldn’t do better……but that’s how it goes sometimes.

Jamaica’s former world youth (2011) and world junior (2012) champion in the men’s discus, Fedrick Dacres with some huge Europeans around him, taking the medals, finished just short of a flag ceremony performance with his best effort of 65.83m. He was tipped to medal but his 4th place shows that he is getting closer to the big men at major championships and should not be disappointed. His training partner Traves Smikle has conquered a lot to be in London and his 8th place 64.04m should be seen against that background.

In the men’s long jump, Damar Forbes of Jamaica found himself at the back of the final pack, doing 7.91m in a field that was simply too good for him.

At the start of the afternoon session, two hours and forty minutes earlier, Bolt and Blake had advanced in 2nd and 3rd position respectively, the latter winning heat two in 10.04 and the star of the meet satisfying himself in heat three just behind round leader, USA’s Christian Coleman, 9.98:9.97. The other Jamaican, Julian Forte finished a non-qualifying 4th in heat 1 in 10.13.

There was action affecting Caribbean dreams in the morning session, the first of the championships.
Of greatest interest was potential runaway favourite Elaine Thompson in the 100m heats and she ended her day’s work by qualifying for the semis along with her other three Jamaican teammates and two Trini girls in Michelle Lee Ahye and Kelly Ann Baptiste. With an automatic entry ticket, courtesy of last year’s Diamond League title, the joint national record holder won heat two in 11..05 to be 5th in the overall ranking, looking to the semifinals. Jura Levy was next in 8th spot with 11..09 which placed her 3rd in heat one. Completing the Jamaican pack, were Natasha Morrison ranked at 15 with 11.21 for 3rd in heat six and Simone Facey at 21 with 11.29, coming 4th in heat five. Ahye was ranked at 10th with 11.14 for 3rd in heat five and Baptiste in 16th spot with 11.21 to take 4th place in heat six. The surprise round leader was Germany’s Gina Luckenkemper who won heat one in a massive personal best of 10..95, the only sub 11 for the opening round.

In the men’s 400, there were five regional athletes advancing to Sunday’s semifinals, all ranked in top 10 positions coming from the heats..` Steven Gardner (BAH), looking extremely easy and catching the eye of the commentators, ran 44.75 to win heat four, the time being the second fastest overall. Jamaica’s Nathon Allen was the fourth ranked going forward with his 44.91 to win the sixth heat. His teammate Demish Gaye was 7th on the ladder, taking 2nd in heat three in 44.98. Lalonde Gordon (TTO) is in 9th ranking spot with a season best 45.02 coming 2nd in heat one. Lastly was Jamal Walton of the Cayman Islands, who ran 45.05 and was 3rd in Heat five to rank 10th fastest qualifier.

A major setback was Jamaica’s O’Dayne Richards, bronze medallist from Beijing 2015, as he crashed out of the men’s Shot Putt qualifying round, only managing 19..95m for 19th spot overall in Group A where he placed 11th.