One of the hottest field events discipline fans will witness at the JAAA National Senior Championship on Saturday June 27, 2015, is the men’s discus throw. Jamaica has been gradually improving in this event and maybe within a couple of years the country could be picking up medals on a regular basis. Currently, Jamaica has two discus throwers (Jason Morgan & Fedrick Dacres) in the top ten of the IAAF 2015 discus throw list. A third Jamaican, Chad Wright, is also among the top twenty of that list.

Jason ‘Dadz’ Morgan, the national record holder (68.19m) and many times National Champion has been in tremendous form this season hurling the discus to far distances like a Frisbee. Morgan, a former sprinter turned thrower is blessed with a wonderful technique and nimble footwork for a man his size. He currently sits atop the world listing with the only throw (at the time of writing) beyond 68 metres this season. The hardworking and gentle giant will be hoping to erase the memories of 2013 when he was ineligible to make the Jamaica team due to his absence from the JAAA trials because of his sworn in ceremony as an American citizen the same weekend. Morgan who has already achieved the 65m standard mark will be using the trials to flex his muscles and put on a great show for the appreciative crowd. This will be Morgan’s third World Championship and probably his best chance at a podium finish.

Fedrick Dacres has been one of the most consistent and fearless throwers in Jamaica for the past 4 years. Dacres won the World Youth and World Junior discus titles back-to-back in 2011 and 2012. The 21 year-old University of the West Indies student has hurled the discus beyond 66 metres on two occasions this season. At the Big Shot Invitational Meet on January 24, 2015, Dacres won with a meet record and World Championship qualifier 66.30m effort. At the University of the West Indies (UWI) Track & Field Invitational, he improved his season best with a 66.40m on March 21, 2015. This talented young man seems on course to challenge his personal best of 66.75m done in Texas in 2014. Dacres is a championship performer and one who will no doubt be looking forward to his first major championship at the senior level.

Chad Wright is the defending champion in this event. In fact, Wright has won the last two national championships (2013 & 2014), and will be seeking his third consecutive title despite the exploits of his formidable opponents. The former University of Nebraska standout who won the NCAA title in 2012 also achieved automatic qualification in April when he hurled the discus 65.03m to finish runner-up at the Triton Invitational Meet in San Diego, California. The mark was also a personal best for Chad Wright who will be competing at his first major championship.

The realization of seeing three Jamaicans wearing the black, green and gold in the discus throw qualification rounds in Beijing will be one of the proudest moments at the World Championship. It is hoped that their performances will impress and attract Diamond League organizers.

Former national record holder, Traves Smikle, would have been a serious contender if not for his off field distractions. Smikle, who is fighting a two-year drug suspension, recently got a reprieve from the Court of Arbitration for Sports (CAS) allowing him to compete until they make a decision.

However, not knowing his fate could affect and play a major role in young Smikle’s confidence. It is felt that even if he competes at the National Championship, he may not be at his best. Nevertheless, Smikle must be encouraged to continue training and competing as this may be his only source of coping with his situation.

His best efforts this season include a second place finish at the UWI Track & Field Invitational Meet where he hurled the discus out to 57.58m. A 6th place finish (58.96m) at the Penn Relays in the College Men’s Discus Throw Championship followed this performance. Smikle, who won a bronze medal at the World Youth Championship in 2009, represented Jamaica at the London Olympics. He has a personal best of 67.12m. Smikle should target the Pan American Games in Toronto, Canada from July 10-26, 2015 as his immediate goal.

Notwithstanding three men attaining the qualifying standard, it does not mean they will be going through the motions. The discus throw competition at the JAAA National Senior Championship will be a throwing exhibition of the highest order never before seen in Jamaica. All eyes should be on the big men with the flying saucers seeking bragging rights and the honour of being crowned Jamaica’s National Champion. Let us all support the ring kings. 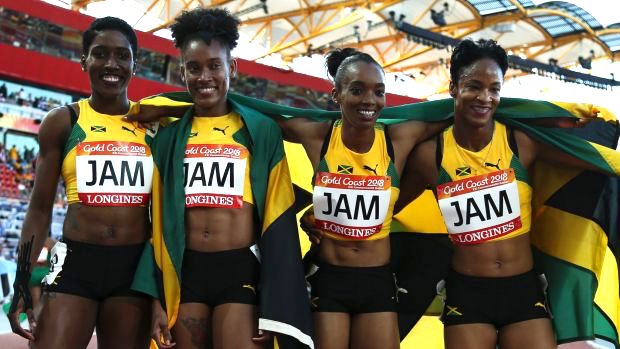