“It’s an amazing feeling,” Hobbs said on the podium after the race. “This season was the best season I’ve had in my life. To finish it out with this title is just a blessing.”

Racing in a final of five collegians and three professionals, Hobbs was the class of the field per usual. She outran Ashley Henderson (10.96) of San Diego State and Jenna Prandini (10.98) of PUMA for the national title.

Sliding in right behind the third spot was Mikiah Brisco with a time of 11.10 to place fourth. With the win, Hobbs becomes the first collegian to pull off the NCAA/USATF double in the 100m dash since 1991 when Carlette Guidry (Texas) accomplished the feat.

In the men’s final, Noah Lyles ran a personal best 9.88secs to take the top spot.

Mike Rodgers, who ran 9.89 in the heats, did not start in the semi-finals.

Hobbs advanced to the final by clocking times of 10.97 on Thursday before running a wind-legal season best of 10.89 on Friday in the semifinals.

Lyles, on the other hand, got through the first round with 9.92 and improved to 9.89secs in the semi-finals.

Kymber Payne and Cassondra Tate will run in the semifinals of the 400m hurdles on Saturday (3:03 p.m. CT), while Brisco, Kortnei Johnson, Kimberlyn Duncan and Jada Martin will run in the first round of the 200m dash that is scheduled to begin at 1:35 p.m. CT. Charlene Lipsey registered a time of 2:00.25 in her 800m run semifinal to advance to Sunday’s final at 3:04 p.m. CT. 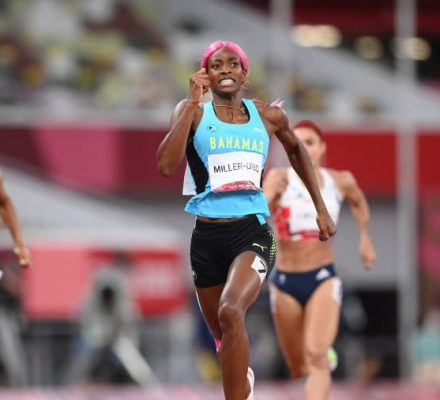