The Honourable Olivia Grange, Minister of Culture, Gender, Entertainment and Sport has said the nation should say thanks and rejoice for the return of Shelly-Ann Fraser Pryce to the track.

Minister Grange spoke today at the Unveiling of the Maquette of the Shelly-Ann Fraser Pryce Statue at a function at the Jamaica Pegasus.

Grange said that Shelly-Ann had emphatically announced her return to competition with improving performances.

She described Shelly-Ann’s accomplishments on the track since 2008 as breath-taking, “leading Michael Johnson former World and Olympic 200 and 400m world record holder to conclude she is the greatest female sprinter of all time.” 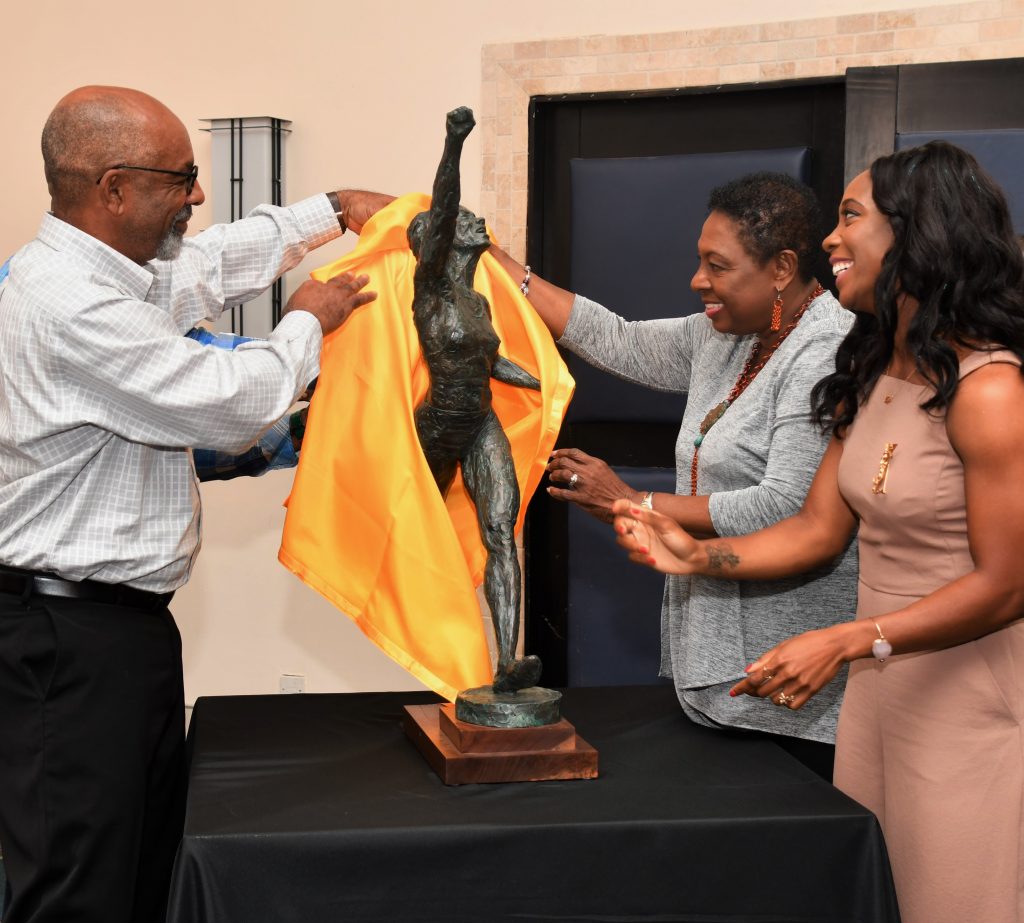 Some of the accomplishments that the Minister recalled are: “Shelly-Ann remains the only female sprinter to be crowned IAAF World Champion over the 100 Metres three times.

“She became the second female sprinter to hold both World and Olympic 100m titles simultaneously.

“After winning bronze at the 2016 Summer Olympics, she became the first woman in history to win 100 Metre medals at three consecutive Olympic Games.

“At age 21, Shelly-Ann became the first Jamaican and Caribbean woman to win 100 Metre gold at the Olympics.

The Minister reminded her audience that renowned sculptor Mr. Basil Watson had been commissioned to design and create statues of four of Jamaica’s most outstanding sports stars, Usain Bolt, Shelly-Ann, Veronica Campbell Brown and Asafa Powell.

She said the statues erected in honour of the athletes represent a major part of the Government’s Jamaica 55 Legacy programme which will have projects falling within the five main headings of Sports Infrastructure, Entertainment and Culture, National Monuments, Gender Infrastructure, and Jamaica 55 Publications.

“The statue is at the Wharf as we speak and will be cleared next week and will be erected at Statue Park at the National Stadium in October.

“I would like to reassure the nation that the maquette that we are unveiling is the genuine article which was presented by Mr. Watson. If you see anything on social media that is not this; then that is a fake. Shelly-Ann has been shown the maquette and she is quite pleased and comfortable with the representation.

“For those interested in measurements, the actual Shelly-Ann Statue will be height to hand – eight feet; height to head – seven feet; front to back – five feet, six inches; diameter of base – 21 inches; and height of base – three inches,” Miss Grange concluded.