BEIJING, China – The first two heats of the 110mh, saw mishaps that Jamaicans Omar McLeod, the national champion and Andrew Riley, in his third championships, survived to make it to the semifinal round at the XV IAAF World Championships. Heat number 1, which also featured a false start, put out Trinidad & Tobago’s Mikel Thomas who crashed into the first barrier and fell to the track.

This unsettled McLeod in the lane to his right and the man who is called ‘’Mr. Silk,”struggled to maintain his focus and balance, hitting barriers in the process and it was a valiant effort on his part, which had him come 2nd in 13.43 to advance in a format where the first four go forward automatically. The heat was won by Barbados’ Shane Brathwaite in 13.28, the top Caribbean qualifier.

Olympic bronze medallist, Hansle Parchment of Jamaica took heat 4 in 13.33 with Greggmar Swift (BAR) 4th in 13.41. Those failing to advance, were Ronald Forbes (CAY), 5th in heat 2 with 13.78 and Eddie Lovett of the US Virgin Islands in 13.65 for 7th spot in heat 5. Riley was in the heat 2 in which he had to maintain his composure through two false starts, including USA hopeful, Ronnie Ash. He handled it well to finish 3rd in 13.43, an automatic qualification.

In the heats of the men’s 5000m, the Caribbean’s only entrant, Jamaica’s Kemoy Campbell suffered a mishap when he fell but gallantly resumed his footing and ran on to post 14:00.55 for 15th place in heat 1. A protest has been lodged by Team Jamaica in an attempt to have the athlete sent through to the final without a re-run of the race.

Two Bahamians represented the Caribbean in the qualifying round of the men’s Triple Jump. Veteran Leevan Sands at 34 years old and the 2008 Olympics and 2003 World Championships bronze medallist, was 6th in Group B with 16.73m to be a provisional qualifier. While his teammate Latario Collie-Minns  did not make it having only managed 16.21m for 12th position in Group A.

The afternoon session will see the finals of the 400mh for women and the 400m for men as well as the semifinals of the men’s 200m and heats of the women’s equivalent. 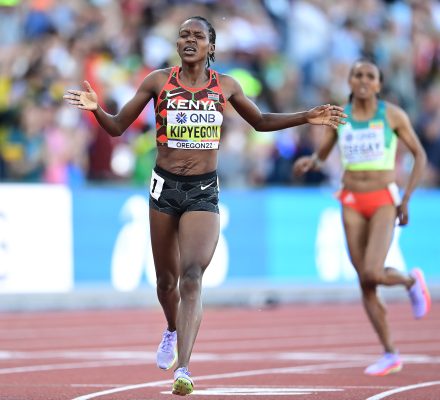