Usain Bolt and Asafa Powell were double winners on the final night of the Nitro Athletics Series here at the Lakeside Stadium in Melbourne, Australia.

Bolt took control early in his only individual race of the series, the men’s 150m, cruising home to win comfortably in 15.28 sec.
The world track and field superstar finished 0.16 seconds ahead of New Zealand’s Joseph Millar, 15.44.

“It was a bit rough,” Bolt said. “I’m not used to running this early in the season.”

Powell sped to victory in the men’s 60m for the second time in the series. He crossed the line in 6.62 after sitting out Thursday’s (9 Feb) event.

Both Powell and Bolt, like they did in the first meet of the series by running the first two legs, combined in this order with Americans Jenna Prandini and Jeneba Tarmoh, to take the All-Stars to victory in the mixed 4x100m, clocking 40.45 to England’s 42.08.

Australian Riley Day topped the women’s 150m in 17.63, with Englishwoman Margaret Adeoye second (17.78) and Jamaican Natasha Morrison, representing Bolt’s All-Stars, third (17.82).
Bolt’s team edged the home team 1030 points to 1018 for the night, and finished four points ahead of Australia on the final overall standings (24 points to 20)

King Bolt! ?☇ @usainbolt lights up @visitmelbourne and strides to victory in the 150m #NitroAthletics

Gordon finishes ahead of Davis at Florida meet 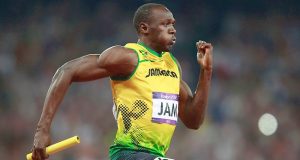