At the 1996 US Olympic Trials, Anthuan Maybank made a big mistake. He committed a lane violation in the men's 400 final and was accordingly disqualified. Six weeks later at the Olympics, he took the USA home to victory in the 4×400 metres relay.

Lane violations struck like lightning in National Championships in the Caribbean. Top Trinidad and Tobago ace Machel Cedenio was the first to be hit. The 2014 World Junior Champion thought he had inched closer to Ian Morris' national record of 44.21 seconds with a winning time of 44.29. Alas and alack, he cited from the violation and scratched from the official results.

The same thing happened to Ricardo Chambers in Jamaica. He finished third in 45.10 seconds but was yellow flagged for a lane infraction. While Chambers probably isn't an individual 400 metre medal contender as Cedenio is, both men have significant roles to play in the relay.

The Trinidad and Tobago team may already be without the injured Deon Lendore who has run 44.41 for the 400 metres this season. If Cedenio is also out, their fine 4×400 team would struggle despite the presence of Olympic bronze medal winner Lalonde Gordon and 2009 World 3rd placer finisher Renny Quow.

Chambers set his personal best of 44.54 seconds in a dream 2010 season, and is fit again after years of injury. In February, the 30 year-old anchored the Racers to victory at the Gibson McCook Relays with a smooth 45 flat anchor.

Maybank's story could be a useful guide. Influenced by his impressive post-Trials running, US selectors picked him for the 4×400. When injury eliminated big names Michael Johnson and Butch Reynolds, Maybank was pressed into service in the final. There he sped through a 43.9 anchor leg to hold off the man who placed second in the 400, Roger Black of Great Britain, to give the gold medals to the USA. 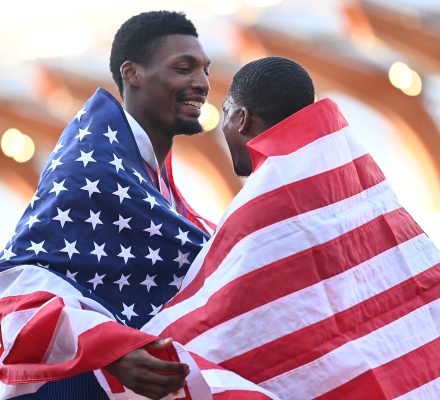