BEIJING, China – As the clock wound down on the 2015 Beijing-hosted XV IAAF World Championships in Athletics, Caribbean eyes, already justifiably smiling, were looking towards further enhancement of the region’s world acclaimed image. It would have to come, firstly, from two Bahamians in the men’s vertical jump finals. They were, Trevor Barry, bronze in Daegu, 2011 and the 2007 Osaka champion, Donald Thomas, as well as in the curtain-pulling 4x400m events with Jamaica, confidence-boosted by both gold medal winning sprint relay performances and a crack Trini squad and Jamaica alone as Caribbeans, in the women’s race.

While Thomas was sorting out his medal repeat, four Jamaican lasses, all finalists in the 400m, with a bronze from Jackson and 4-5-6 in finishing echelon thereafter, smashed the USA long-standing stature of dominance, to smithereens. They lined up Christine Day, the reigning national champion on lead off, handing over to the individual bronze warrior, Jackson, high school coach, Consie Haughton, watching from the Far Beyond, Stephenie Ann Jackson, the Commonwealth champion and on anchor, the brave survivor of the most dreaded medical challenge, Novlene Williams-Mills, the multiple performer in so many efforts and the experience all that carries with global finalists, national titles, World Championships relay silver medals  all in that mix. There were widespread doubts before, as despite the finals of the individual race’s maximum presence by the Caribbean team, the USA’s top girls on times coming in Sanya Richards-Ross and Francena McCorory, failing to make the team for the flat race, rested throughout and were fresh-legged. It mattered very little as Day at 8.05 in the night, local time, gave her team the moral lift as second legger Jackson put it, to hand over to the Vere Tech thunderball, after a 49.96 effort. Jackson took the lead and widened in 49.75 to set up McPherson, who in her own words after, ‘’I just had to maintain.”

In the  event, she was run down and overhauled by USA all round speedster, and 400m gold medallist, Allyson Felix, giving Williams-Mills a two metre deficit. The rest will be catalogued in history as the Florida-based Williams-Mills, bided her time for a storming homestretch assault on the lead which brought McCorory to book, as well as Jamaica’s second gold medal in the event following their 2001 Edmonton victory. The records will read:

The Jamaican men, drawn in lane 9, caught in the afterglow of an anti climax sent into battle a quartette of Peter Matthews a 400m semi man here, Ricardo Chambers, the last gasp substitute for the ship jumper, Edino Steele, the enigmatic 43.93 heats man in Rusheen McDonald, arguably ill-timed and costly, and the Moscow relay sensation, Javon Francis, whose ‘’no-show’’ in competition following his Trials victory in late June, surprised many and angered a few. Matthews was steady and handed over in second position to the USA. Chambers kept it going but shortened in the straight, losing valuable ground, McDonald still haunted by that opening round in the flat race effort, as it seemed, was ugly in the last paces and the Reggae Boyz country slipped further adrift. Anchor specialist, Francis did as expected from fifth position, sweeping past the USA, an ever-threatening Machel Cedenio his Soca boy nemesis as a Junior and the Briton Martin Rooney to assume the lead position up to 180m to go when they all came for the gold medal. Francis was unable to sustain his Moscow-branded repeat and was nipped at the line by Rooney, denying Jamaica what would have been their 13th medal. Tape reads:-

Both Barry and Thomas were shut out from the medal podium, the 2007 champion was 6th with a 2.29m clearance and Barry 2.25m for 10th spot. World Champion, his country’s first ever, went to Canada’s Derek Drouin with 2.34m.

So, as it came to its close here in Beijing, Jamaica finished second out of all the competing nations, with 12 medals the amount of golden efforts, being the deciding factor. They achieved 7 gold, with 2 silver and 3 bronze. With their silver in the men’s relay at the end, Trinidad & Tobago ended with 22nd with 1 silver and 1 bronze, the same as Bahamas. Grenada ended with 1 bronze, won by Kirani James in the men’s 400m. 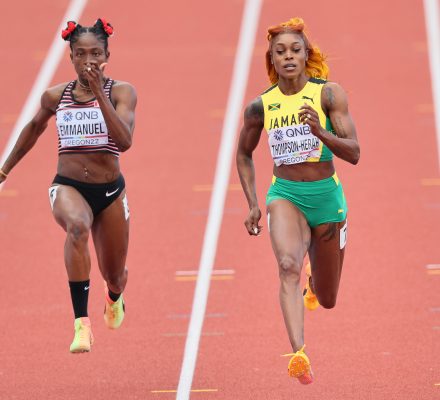