Florida won a trio of individual titles – two from its women and another from its men – on the final day of the SEC Outdoor Championships, as the men’s team finished second in the team race, while the women settled for a tie for fifth place.

Sophomore Hakim Sani Brown gave the Gators their second title of the weekend on the men’s side, as he and teammate Raymond Ekevwo combined for a 1-2 finish in a stellar 100 meters final. Sani Brown clocked a wind-legal 9.99 seconds, tying Bernard Williams’ school record from the 2000 NCAA Outdoor Championships. It was also the second-fastest time in Japanese history, as well as the second-fastest time by a collegian this year.

Florida’s 1-2 finish was the first of its kind since 2014, when Texas A&M’s Prezel Hardy Jr. and Shavez Hart swept the top two spots. Sani Brown’s title is the ninth in program history and first since Jeff Demps (2010) and Terrell Wilks (2011) won it in consecutive years.

David joined Gator Great and Olympian Shara Proctor (2010) as the only other women in history to win all four horizontal jumps SEC titles (indoor and outdoor long jump and triple jump) in the same year. Her title is the ninth in school history and first since Ciarra Brewer’s in 2014.

Barrett became the first freshman to win the 1,500 meters title since Tennessee’s Sarah Bowman in 2006. The Australian stayed with the pack much of the race, then swung wide and outkicked the rest of the field in the closing 100 meters. It is the sixth 1,500 meters crown in school history, and Barrett is the first Gators runner to win it since Cory McGee in 2014.

o   Finished as the silver medalist for a second consecutive SEC Outdoor Championships. His top mark of 15.92 meters (52 feet, 2.75 inches) ranks 19th nationally and secured him a spot at the NCAA East Preliminary. Brown has finished second or won the triple jump title at each of the last four conference championship meets.

o   Posted highest finish in the event since winning the title in 2011. The Gators were the bronze medalists in this event each of the last two SEC Outdoors.

Head coach Mike Holloway on the meet as a whole…

”It was an incredible weekend. Hats off to the Arkansas women and LSU men. As far as the Gators go, I was proud of almost everybody.

“What Yanis (David) did is unheard of. Very proud of Hakim (Sani Brown). Thomas (Mardal), on his last throw, a big personal best to win the [hammer throw] title. Anders Eriksson in his first meet of the year going into the top 15 in the country. I’m very proud of Clayton Brown for what he did this weekend – that’s a testament to who we really are. We just have to keep battling away.”

“I’ve got to coach Grant better. I’m going to put that on my shoulders. I’ve got to do some things to get him locked in better the last part of the race. That’s my job, and I’ll get it done.

“I told him this after the 4×100 relay, you’re going to be sore on a championship weekend. You just have to go out and trust your technique. He did, and he was fine. Hakim, for a long time, has run off of talent. He’s finally starting to embrace the technique of the 100, the intricacies of the 100. You can’t just put the blocks down and run. I know he can get better, but the biggest thing he did this weekend was finally trust his race model better.

“I know people are probably going to criticize me, because it probably cost us a championship, but I’m not that coach. I’m not the guy that’s going to put someone on the track that’s not sure if he can make it, just for the sake of the team. That’s not who I am. Hakim has big goals this summer for the World Championships, and with the Olympics next year. I don’t want to cause a setback.

Coach Holloway on the two women’s distance titles this week…

“That was big. (Assistant) Coach (Chris) Solinsky has been talking about Imogen for a while. To see her do that, and the way she did it was phenomenal. Very proud of the work they’ve done. And how about Jessica Pascoe? Eight weeks ago, she was struggling with her health. Now she’s the SEC champion and sixth in another event, putting up 13 big points for the Gators.”

“Never seen it happen like that. None of us knew. We were in the back warming up for other events, and (assistant) Coach (Mellanee) Welty called and goes, ‘How about that?’ I went, ‘What happened?’ She goes, ‘You don’t know?’ Then she hands Amanda the phone, and Amanda says, ‘You’re talking to the SEC champ!’ I’ve never seen that before. Super proud of her. For her to come back after being injured at the beginning of the year and put together a personal best score, very proud of her.” 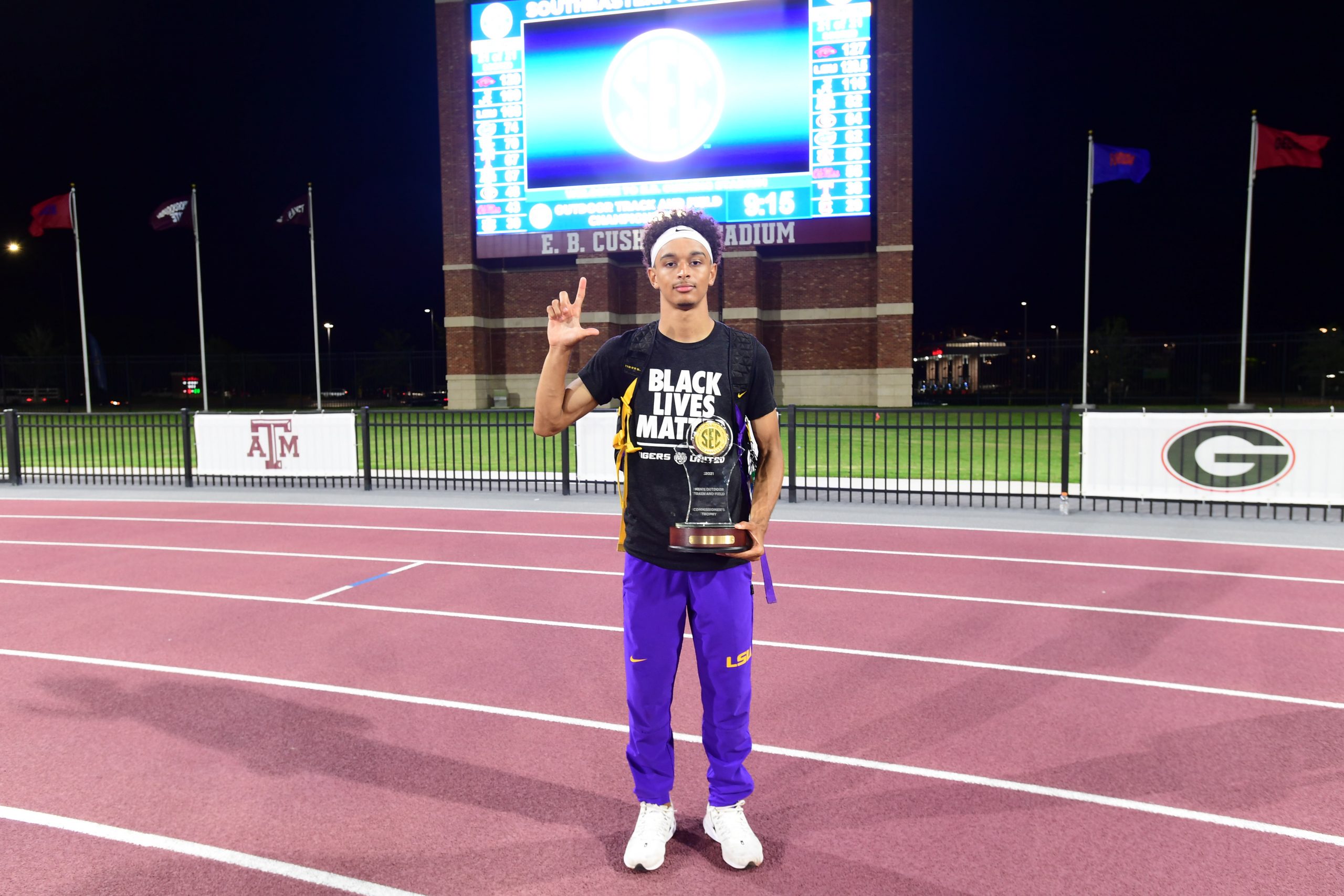