Premier sponsors of youth athletic development of more than 12 years, telecommunications firm FLOW on Wednesday, 2 March 2016, announced an investment of $81 million dollars in sponsorship for the ISSA/Grace Kennedy Boys and Girls Championship administered by the Inter-Schools Secondary Association. The amount nearly doubles the company’s previous commitment and earns FLOW the title of ‘exclusive telecommunications sponsor’ of the prestigious games for the next three years.

Speaking at Wednesday’s (March 2) press conference to announce details of the 2016 staging of the Games, Stephen Miller, Sponsorship Manager said “from both a local and regional perspective, we have reaffirmed our commitment to connect with our customers and the wider community by getting more involved in education and sports. Champs for us remains atop a list of priority partnerships for us going forward.”

Miller said that it has been an honour for the telecommunications provider to be able to invest in an event that has garnered such tremendous local and international interest. He further pointed to the significance of this year’s event relative to the 2016 Rio Olympics scheduled for August.

“The eyes of the world are now on Jamaica, the undisputed ‘Sprint factory’ and we are committed to helping our local governing bodies to fly our national flag high as we demonstrate once again that we are number one.” Mr. Miller also referenced the company’s ongoing support for athletics in Jamaica which now includes sponsorship of the JAAA at the senior level. He further noted that over the past 12 years, the firm has invested more than $200 million in the development of athletics.

The company also highlighted ongoing efforts to provide direct cash donations to some of the top performing schools which will help offset the huge costs of providing proper nutrition, equipment and transportation for athletes.  Through the ‘Journey to Champs’ programme, this year FLOW committed an additional $1 million dollars to five competing schools.

“At FLOW we remain committed to continue supporting our youth in such a meaningful way. We also appreciate that like with any sport, long term dedication and perseverance are key pillars to success and ISSA certainly has found that in us as partnering sponsor,” Miller said in closing. 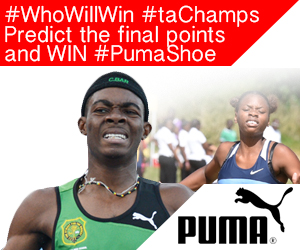