Muir, the 2022 World Athletics Championships 1500m bronze medalist who also won the European and Commonwealth 1500m titles this summer, blasted away from the field at halfway to win in a new race record of 4:14.8.  Wightman, the 2022 world 1500m champion who also won a 1500m bronze medal at the Commonwealth Games and an 800m silver medal at the European Athletics Championships this summer, waited until the last stages of the race to slip ahead another Briton, Jake Heyward, and win his third Fifth Avenue title in 3:49.6.  A total of 8501 runners finished the race, the second-highest total in event history.

Muir, who like Wightman represented Scotland in the Commonwealth Games, carefully planned her attack with coach Andy Young.  They decided to bluff the field midway through the race where Muir would appear to be going for the halfway prime of $1000 before she would surely slow down to her regular race rhythm.

“We went out yesterday and looked at it and marked out where the halfway point was,” Young told Race Results Weekly.  “I said, ‘if you go here (you) break the field apart.  If you do that, it’s like a double bluff.  The people will think you’re going for the halfway mark.  You’re going to catch them by surprise and keep going.'”

Muir did exactly that.  She rapidly built a huge lead and her key rivals realized quickly that she wasn’t coming back.

“I was like, well, Laura really wants the halfway bonus,” said American Nikki Hiltz who finished second in 4:17.4, a time which would have won every previous Fifth Avenue Mile on the women’s side except three.  “I thought she was just going to skirt ahead to get the bonus, but she just never looked back.”  Hiltz added: “I was like, she’s not slowing down.”

Just before breaking the finish tape with her victory well in hand, the exhausted Muir eased up her pace just slightly.  Had she slowed just a bit more she might have missed breaking Jenny Simpson’s event record of 4:16.1 set in 2019.  She said later that the win was all she wanted today.

“With the conditions, I wasn’t thinking about times at all,” Muir told Race Results Weekly.  “I didn’t realize it was that fast; I didn’t actually look up at the clock when I crossed the line.  I would have been disappointed, but the main thing was for me to win today, and I was just so chuffed that I could do that.”

Indeed, as his 20 rivals ramped up the pace in the final quarter Wightman simply stayed with them until it was time to seal the win by accelerating in the final 100m, veering to the center of the roadway to break the tape.  He was confident of his speed just having run three consecutive fast 800m races, including a personal best 1:43.65 in Brussels on September 2.

“The one good thing about running 800’s the last few weeks is I knew my speed was as good as anybody’s in the field.  So, if it came down to the last 200 I should be able to hold on strong enough.”

Heyward, who took fifth in the Commonwealth Games 1500m for Wales, was keying off of Wightman and was keen to win.  He executed his strategy perfectly, but just couldn’t match Wightman’s sizzling top speed at the end.

“This is my second time here,” said Heyward, who finished third at Fifth Avenue in 2021.  “Last year, I judged it slightly wrong.  Obviously, Jake’s quite quick at the end.  When he gets going, it’s really hard to get back on his terms.”

In the blanket finish which followed Wightman, American Sam Prakel got third in 3:50.4, Canadian Will Paulson finished fourth in 3:50.7, and American Cole Hocker got fifth and was given the same time as Paulson.  Every man in the 21-athlete field broke four minutes.

Wightman, who upset Norway’s Jakob Ingebrigtsen to win the world 1500m title, has had a dream season.  In addition to winning medals at all three of this summer’s championships, he lowered his 1500m personal best to 3:29.23, his mile best to 3:50.30, and his 3000m best to 7:37.81 (indoors).  Winning again on Fifth Avenue was the perfect way to end his season.

“I couldn’t have asked for it to have gone better,” Wightman said of his 2022 season.  “To finish here, like, this is probably my favorite meet of the whole year.  So, to be able to win it just makes it sweeter.” 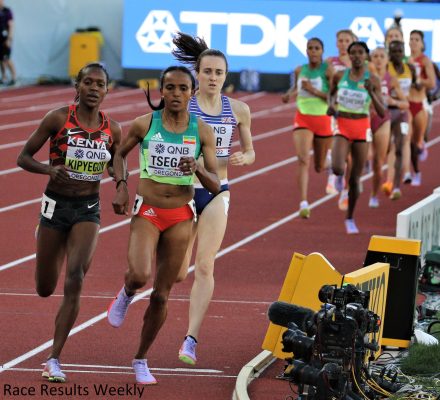