Jamaica pocketed three medals, two silver and a bronze, on Tuesday’s (2 July) second day of the Cali22 World Athletics U20 Championships in Colombia.

Jamaica pocketed three medals, two silver and a bronze, on Tuesday’s (2 July) second day of the Cali22 World Athletics U20 Championships in Colombia.

Bouwahjgie Nkrumie, who equaled Yohan Blake and Christopher Taylor‘s Jamaica junior record of 10.11 in the semi-finals, blazed to 10.02 in the final to obliterate the mark.

Nkrumie was out fast, and only Letsile Tebogo‘s world U20 record of 9.91 was faster. Tebogo came in as the overwhelming favorite with times of 9.96 and 9.94 seconds earlier this season. He now holds the two fastest times ever run by a teenager.

“It’s a very good feeling,” Nkrumie said. “To represent your country is always a privilege, and to get a medal is an accomplishment for me,” he added.

Kobe Lawrence became the first Jamaican to win a shot put global medal when he threw a personal best 20.58 meters to claim silver. “It’s a very welcome achievement,” he said, “I am very happy for myself. I have been praying a lot and working hard, so I am happy.”

Johnson spoke on behalf of the team: “We are happy we got a medal. We came out here to get a medal. “As Jamaicans, we strive to do our best,” he added, while saying that the team’s national record run made it extra special.

The men’s 400-meter semi-finals will also have two Jamaicans in Delano Kennedy, who ran a personal best of 46.24, and Shemar Uter, who clocked 46.66 seconds.

Only Oneika McAnnuff, with 59.45, advanced in the 400-meter hurdles as Safhia Hinds’ 1:00.97 wasn’t good enough. Brandon Pottinger is the only Jamaican in the men’s high jump, and he advanced with a clearance of 2.08 meters. 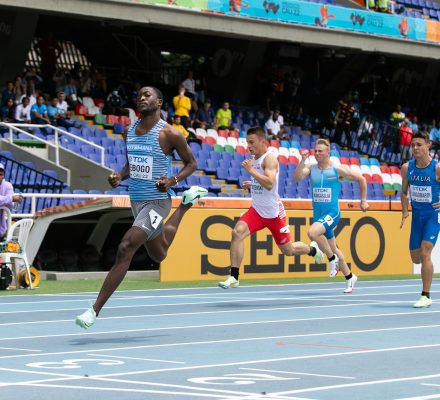