The final this year was shaping up to be possibly the most anticipated event at ‘Champs 2015’ until tragedy struck Kingston College’s star athlete Nathaniel Bann at the Gibson McCook Relays. Bann who had not featured in any of the weekly competitive individual sprinting events leading up to ‘Champs’ pulled up and fell awkwardly while anchoring his team in the final of the Class 2 4x100m relay. It seems unlikely that Bann will recover sufficiently in time to provide the necessary challenge for Calabar’s 15-year-old sensation Christopher Taylor. It must be a sad feeling for Nathaniel Bann and fans. Although Bann might still compete, he will not be at 100%. It would have been interesting to see a fit Bann who usually establishes a torrid pace with his powerful and electrifying running style that leaves his competitors for dead after 300 meters squaring off with Taylor. Injury may have robbed fans of this remarkable sight. However, with advancement in modern treatment of pain and injuries, there is still hope of recovery.

Taylor, on the other hand, looks extremely fit and seems destined to become a ‘Champs’ legend. He has run times that belies his age and many feel if he stays injury free, he could establish records in the one-lap event for all three classes. He has looked superb all season with his smooth running style. One of the outstanding qualities that Taylor possess, is the ability to run fast races without the assistance of stiff competition. His stunning 46.87 clocking at the Youngster Goldsmith Classic was an ominous sign for his competitors and the ‘Champs’ record. If fans had any doubts that the record is in jeopardy then Taylor’s fantastic 45.69 clocking at the CARIFTA trials would have convinced all the doubters. These amazing times were achieved in lanes 8 and 7 respectively. I firmly believe that Taylor will lower the Class two 400m record of 46.64 seconds held by Devaughn Baker of Jamaica College at ‘Champs 2015’ in the heats or semi-final.

This will be the second year in a row that Christopher Taylor could be racing against the clock and not his competitors. Without a doubt, Taylor will attract several sports journalists and potential sponsors from all over the world documenting his every move at ‘Champs’ 2015. Many fans hope that despite youthful exuberance, Taylor will be able to handle the limelight by remaining focus throughout the paparazzi period while executing the perfect race. This is one of the races where fans will be switching their focus back and forth from Taylor to the clock.

This event produced the performance of ‘Champs 2014’ with Calabar’s Javon Francis record-breaking run of 45 seconds flat. Francis achieved this feat without the presence of the highly touted 2013 World Youth Champion Martin Manley of St. Jago High whom many expected would have provided his greatest challenge.

This year the field is still very deep as only two finalists and podium finishers (Javon Francis and Lennox Williams) have graduated. Some interesting transfers have taken place during the year with Kingston College who did not have an entrant in last year’s final benefitting with two quality quarter-milers in last year’s finalists Twayne Crooks formerly of Vere Tech and Marco Doodnaughtsingh formerly of Kemps Hill High. After attending a number of meets leading up to ‘Champs’, this writer is confident Twayne Crooks is one of the gold medal prospects in this event. Mr. Crooks has been so impressive that some persons in the know believe it would be an upset if he does not medal in this event. His combination of speed and power makes him a dangerous adversary. Those who saw him jog 46.92 at the Youngster Goldsmith meet in February were fully aware that a storm is brewing. At the recent G.C Foster College Classic on March 14, 2015, Crooks became the second K.C. athlete this season to dip below 46 seconds with a superb 45.91 in windy and foggy conditions. At ‘Champs’, fans will want to see if Crooks can continue shaving off a second of his previous times.

Doodnaughtsingh has not been as impressive as Crooks, however, his injury and loss of form has been a blessing in disguise. His teammate, the tall and powerful Akeem Bloomfield has been a revelation over 400m this season. Bloomfield’s amazing run to win the CARIFTA Boys Under-20 400m title in 45.41 seconds has created a buzz among Kingston College fans and nightmares for his competitors. Bloomfield confirmed after the race that his aim was to go out hard and employ some scare tactics. The rest is history and just thinking about what the long striding Bloomfield can or will accomplish with his explosive talent over 200m and 400m will give experts goose pimples. Bloomfield’s participation in this particular event will invite track crowds like ants to a picnic. The Kingston College spirit, non-stop chants and loud drums throughout this event should motivate both Crooks and Bloomfield.

Martin Manley who added the Youth Olympic title to his collection last year should make his long awaited entrance in this event. He should command the respect of his peers. However, he does not possess that killer instinct like last year’s winner (Javon Francis) who drove fear into his opponents. Despite Manley’s quality, nothing short of a scintillating run can guarantee him success in this highly competitive field. This season, experienced coach Danny ‘The Maverick’ Hawthorne has been very methodical in his conditioning of Manley to peak when it matters. Manley’s St. Jago High teammate Nathon Allen (46.11 PB) who won the silver medal last year while being dragged by Francis to his second fastest time ever of 46.16 seconds will be aiming to be the man standing in the middle of the podium at ‘Champs 2015’. Nathon Allen who has deceptive speed may have to change his laid back approach in the first half of the race to stay with the front running Crooks and Bloomfield. It will be very interesting to see the tactical approach of the Kingston College and St. Jago High athletes in this event.

Devaughn Baker of Jamaica College will need to rise to the occasion and achieve a lot more than just making finals. The record holder in class two has the speed and technique to challenge for a medal and ignite the dark blues’ supporters who would love to see him run with a little more determination this year. Baker has shown throughout this season that he has rediscovered his zest for competing. At the recent CARIFTA Trials, he entered virtually all the sprint events as if he was training for an ironman competition. It was a great test of his stamina, however, some persons were left wondering if he was desperately trying to make the CARIFTA squad or using the trials as speed preparation for ‘Champs’. He ran the 100m, 200m and 400m heats and finals over 2 days and ended up looking like a man trying his best to outrun his shadow. Baker will be hoping the experiment pays off at ‘Champs’.

This event will answer one of the following questions, 1) Do you think Crooks can steal it? 2) Is it time for Bloomfield to blossom? 3) Will Manley become a Hero?

The only certainty in this race is that it will be the first time in four years that the winner is not from Calabar. Is there a possibility fans will witness the first sub-45 seconds clocking by a schoolboy at the Boys & Girls Championship? 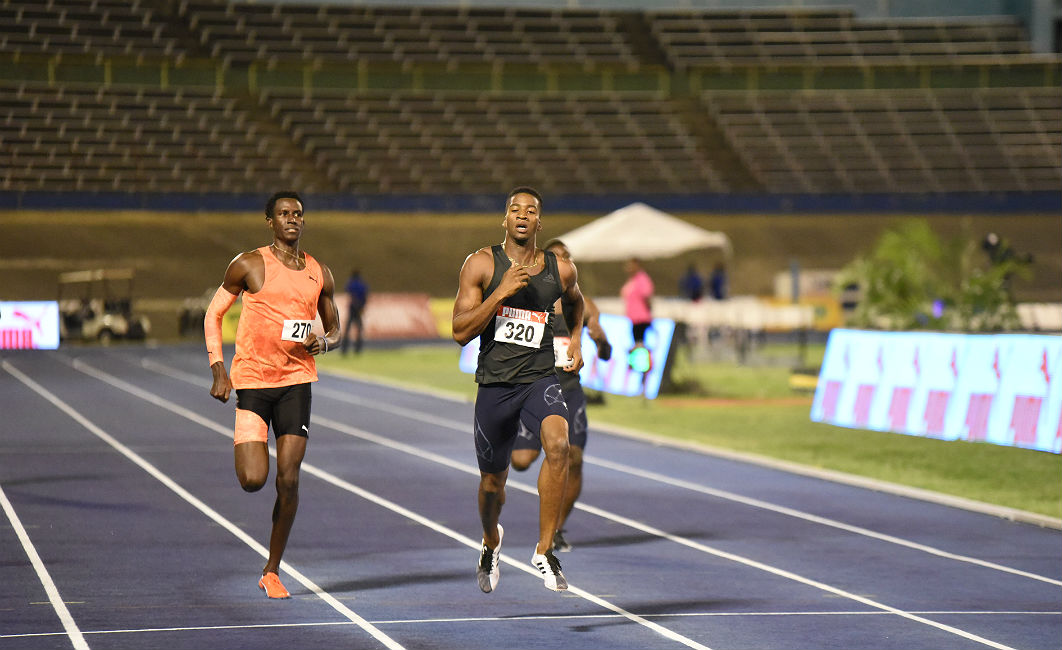