The  now world acclaimed Reggae Marathon, Half Marathon and 10k, this year at its 15th Anniversary staging, scheduled for the weekend of December 3-5 in Negril, had it s plans rolled out by the team of organizers, the Jamdammers Running Club of Kingston at the Luxor Room of the Altamont Court Hotel, on Wednesday morning.

Led by Race Director and former Jamaica Athletics Administrative Association Executive, Alfred ‘’Frano’’ Francis, a battery of speakers including President of the Negril Chamber of Commerce, businessman and hotelier. Lee Issa, spoke of the tremendous positive impact the event is making on the tourism mecca and how it has encouraged repeat participation from all over, a main and highly anticipated feature being the World’s Best Pasta Party, on the Friday evening.

2, 500 entrants are expected from 35 countries and there will be strong local presence from business houses and, clubs and institutions, as well as high schools, who will make the race a part of their background training preparing for the most important Boys & Girls Champs.

A proud moment for the organisers,  as expressed by several speakers, was to see former Manchester High School middle distance athlete, Natoya Goule representing Jamaica at the recent Beijing World Championships, realizing that as a pint-sized 14 year old, she had made the Reggae Marathon, a part of her entry into road racing. 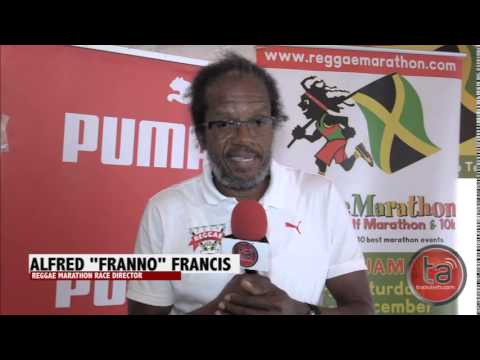