By David Monti, @d9monti
(c) 2022 Race Results Weekly, all rights reserved, with permission to use.

EUGENE (23-Jul) — Through the end of June, reigning Olympic 800m champion Emmanuel Korir had only run three 800m races this year, had only broken 1:46.00 once, and never finished higher than fifth.  But since winning at a low-key meeting in France on July 4, Korir has yet to lose a race, including all three rounds here in Eugene at the 18th World Athletics Championships, where he just won his first world title in the sixth-fastest time in the world this year: 1:43.71.

Korir, 27, who is unsponsored and was managing a calf injury for much of this year, ran a perfectly-executed race, taking advantage of his powerful closing speed to clinch the medal in the final 50 meters.  He said he was ready for any kind of race today.

“Being in the field you have to expect different scenarios to happen,” Korir explained to two reporters.  “The race might be fast, and it might be slow.  So, what are you going to do?  I placed myself in a good position knowing that anything can happen.”

Korir stayed off the front through the first lap, running a close fifth to Canada’s Marco Arop who split the 400 in a not-too-fast 52.1 seconds.  At the time, Korir was also behind France’s Gabriel Tual, Algeria’s Slimane Moula, and his Kenyan teammate Wyclife Kinyamal.  Arop continued to lead down the backstretch and through 600m (1:17.6) and Korir was only in fourth position with 200 meters to go.  He said he was feeling fatigued but was trying to stay engaged in the fight.

“To be honest, I was not fresh,” Korir admitted with a laugh.  “I was struggling.  Nothing was fresh there.”  He added: “Inside me I was working hard.”

Rounding the final bend Arop still held the lead, but Korir was sprinting hard.  The big Canadian had a good gap, but began to tie up with about 50 meters to go.  Korir, pumping his arms furiously, caught Arop with about 30 meters to go.  Behind him Algeria’s Djamel Sedjati was also sprinting hard and also managed to pass Arop inside of the final 10 meters to take the silver medal in 1:44.14.  Arop was far enough ahead of Kenya’s Emmanuel Wanyonyi to defend the bronze medal position in 1:44.28.

Korir’s victory was remarkable, considering his lack of dedicated preparation due to his calf problem.

“Even though I knew I was not in good form because of injuries and whatever I did my best here,” he said.  “I said, let me do this trying to gain the courage again and again, and here I am.”

By winning here tonight, Korir became the first man in history to win an Olympic 800m title then come back in the following year to win a World Athletics 800m title.

In a tactical women’s 5000m final, teamwork helped deliver the gold medal to Ethiopia’s Gudaf Tsegay, the silver medalist in the 1500m five days ago.  Tsegay, 25, worked with teammates Letesenbet Gidey, the 10,000m gold medalist here, and Dawit Seyaum to control the pace right from the gun.  The trio, taking turns at the front, kept it slow through 3000 meters (9:02.8) while their three Kenyan rivals –Beatrice Chebet, Margaret Chelimo Kipkemboi and Gloria Kite– kept guessing as to when the race might speed up.  The three Ethiopians could be seen conversing in the early laps.

“We discussed about the teamwork when we came to the competition,” Tsegay said through a translator provided by the Ethiopian federation.  “So, we tried to do the teamwork during the competition.  One of our teammates, Dawit (Seyaum) cannot make the lap, but both Gudaf and Letesenbet had a medal so we wanted the gold and the bronze because of this.”

Lap after lap, Gidey, Tsegay and Seyaum traded the lead while the rest of the field simply followed.  The trio averaged 72 seconds a lap through 4600 meters, and it wasn’t until the final lap that things really got moving.  Dutchwoman Sifan Hassan drove to the lead with just 200 meters to go to try to upset the Ethiopians’ carefully laid plans, but she couldn’t match the 59.95-second final lap put in by Tsegay which delivered her victory in 14:46.29.

“The last lap I gave everything,” said Hassan, who admitted that she was short on training coming into these championships.  “But they were just better than me.”

It was not a great race for the USA team of Karissa Schweizer, Elise Cranny and Emily Infeld.  Infeld was unable to hold the pace and finished last in 15:29.03.  Both Schweizer and Cranny ran in the lead group for most of the race, but with about two laps to go Schweizer pulled up and had to stop.  It was later revealed by USA Track & Field that she suffered a strain to her left calf.  Cranny ended up ninth in 14:59.99, not as good a finish as she wanted but an improvement on her 13th place performance in the Tokyo Olympics last summer.

“It went pretty much like expected,” Cranny told reporters.  “You never quite get into a rhythm.  Once we got going it’s like, herky-jerky all over the place.”  She continued: “Going into the race, like be ready for a big last 1-K; that’s usually where things happen.  I’m a bit bummed.  I feel like with 600 to go I just had nothing left.”

The 18th World Athletics Championships conclude at Hayward Field here tomorrow.  There are two distance finals: the 5000m for men and the 800 meters for women. 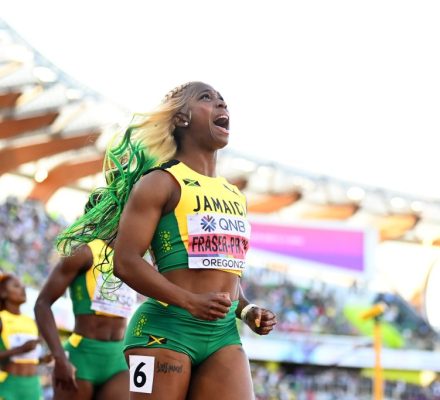 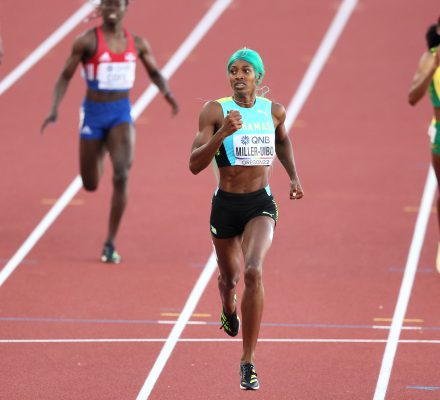