By David Monti, @d9monti – (c) 2022 Race Results Weekly, all rights reserved with permission to use

She hopes to get faster and possibly become the first USA athlete –male or female– to win in Berlin.  The Nike-sponsored athlete passed up what would surely have been larger appearance fees from either Chicago or New York to take advantage of Berlin’s super-fast course where multiple world records have been set.

“I’d love to run faster than that in Berlin,” D’Amato said of her American record at this morning’s press conference.  “To win a great race such as Berlin would be a dream and a great career ambition.”

D’Amato’s unusual path to marathon stardom has been well-chronicled, including some seven years away from competition to build her “regular” career and raise a family (she has two children with her husband, Anthony).  But her path to Berlin has been just as unusual.  After her record in Houston and some time to recover, D’Amato got back on the roads in March and marched ahead with her regular road racing season.  She took second at the USATF 25-K Championships in May, won the USATF 6-K Championships in June, then ran an excellent 31:03 at the Mastercard Mini 10-K in New York a week later.  Everything was going according to plan, and D’Amato was excited about her summer.

“It was incredible,” D’Amato said of the atmosphere at the Mini.  “New York shows up, and puts on just an incredible event.”

But then things took an unexpected turn.  Olympic Marathon bronze medalist Molly Seidel was forced to withdraw with an injury from the national marathon team training for the World Athletics Championships in Eugene, Oregon.  On July 1, D’Amato got the call-up from USA Track & Field to replace Seidel, and with only 17 days to get ready for the July 18 race she set about to do a super-short marathon build-up.  She was up for the challenge.

“Bittersweet and unexpected news for an alternate to hear, as I was genuinely rooting for our rockstar marathon team,” D’Amato wrote on her Instagram account on July 2.  She continued: “This is my first time representing my country at a world competition.  I get teary eyed just saying that because for a while I thought that dream had pasted [sic.].  But on July 18 I’ll get to line up with some of the world’s best marathoners sporting the red, white and blue.”

Remarkably, she finished eighth in 2:23:34 behind teammates Sara Hall (fifth, 2:22:10) and Emma Bates (seventh, 2:23:18).  It was the first time at a World Athletics Championships that the American team put three women in the top-10 in the marathon.  It was painful, but D’Amato was jazzed.

“I definitely was humbled by this,” D’Amato told Race Results Weekly.  “I think the short marathon build is not the way to go.  I really think that I could have used another, like, month or two to build up with the long runs.  I think that last lap when it was time to dig just had a really hard time locking-in and digging.”

With just 69 days between the races in Eugene and Berlin, D’Amato was determined not only to be ready for her next marathon, but also run the other road races she had planned.  She won the Asics Falmouth Road Race on August 21, collecting $18,000 in prize and bonus money, then won the USATF 20-K Title at the Faxon Law New Haven Road Race on September 5, in a gripping battle with national half-marathon record-holder Emily Sisson.  D’Amato’s time of 1:04:29 was a championships record, equivalent to a 2:23:21 marathon using the time-tested Riegel conversion formula.  It was a terrific performance given the warm temperatures and soaking humidity.

“I can’t believe I pulled that one off today, to be honest,” D’Amato told reporters after her win in New Haven.

D’Amato has at least one advantage over her rivals: she’s run the race before.  Before the pandemic in 2019 she ran 2:34:55 at Berlin –then a personal best– finishing 17th.  Her success at that race is part of the reason she’s back in Berlin this year.

“I had a very good race here and that’s why I’ve come back,” D’Amato told reporters today.  “The course is very fast and really flat, pancake flat, the organization is top class and the support from the spectators is fantastic.”

Separately, it was announced that another top contender, Nancy Jelagat of Kenya who has a career-best time of 2:19:31, was forced to withdraw with a painful knee and hip injury, according to her management. 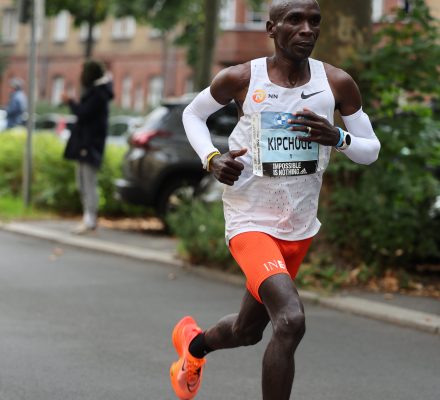