With the exception of last year’s winning time of 11.19 seconds by Christania Williams of Edwin Allen High, sprinting in the girls senior class at ‘Champs’ has not been of a high standard as it was a decade earlier.

This year, some of the youngsters who were running faster than their seniors three years ago are now in class 1 and ready to revive female sprinting which some feel is on the decline. Earlier in the season, Wolmerian Shauna Helps looked the most likely person to win the gold medal in her first year in Class 1.

However, over the past three weeks, we have seen a dip in Help’s performances. Her disappointing showing at the CARIFTA trials where she failed to make the team for the second year running and subsequent absence from the Digicel Grand Prix 100m finals at the G.C Foster College Classic a week later did not quell whispers of a possible injury. Helps has won the 100m title in every class at ‘Champs’ and the Class 3 record holder (11.50) would like to continue her trailblazing trend and end her career on a high note. Her best effort so far this season is an 11.66 clocking done at the Corporate Area Meet in wet conditions on February 19, 2015. We all know she is a championship performer and a podium finish must not be ruled out.

One athlete on the rise that fans should focus some attention on is Sasha-Lee Forbes of Holmwood Technical. Forbes better known for her blistering relay legs has been competing really well this season. The World Junior Games 4x100m relay silver medallist ran a season best (11.63) at the G.C Foster College Classic and is definitely a 100m medal contender at ‘Champs’ and the most likely person to cause an upset. Another worthy competitor in this event is Rene Medley of Vere Technical. This stocky yet powerful sprinter is the 2015 Central Champs winner and has been consistently running in the 11.7 seconds range this season. She is a very determined athlete who will not ease up the pressure on her rivals.

St. Catherine High School speedster Shian Hyde who missed last year’s edition of ‘Champs’ after transferring from St. Mary’s College could feature prominently in this event. Hyde has raw speed but seems to suffer from anxiety when faced with quality opposition. She has been disappointing for the past two years at the CARIFTA trials where she placed fifth on both occasions in the 100m finals. She has to control her nerves, confront her fears and unleash that raw speed in this race; otherwise, she will get another hiding.

One of the red-hot favourites for this event is St. Jago High star athlete, Natalliah Whyte. She has steadily built up a solid reputation as a proven high performer. Whyte is a former CARIFTA Under-17 100m champion and the 2014 Youth Olympic Champion for 200m. Last year in the class 2 100m final, Whyte finished second in an almost dead heat with an identical time (11.80) as the eventual winner Shauna Helps of Wolmer’s High School for Girls. Many persons are looking forward to the renewed rivalry between the two this year at ‘Champs’. At the recent CARIFTA trials, Whyte comfortably sped away from a quality field that included Shauna Helps, Rene Medley and Shian Hyde to win in 11.71 seconds.

Saqukine Cameron of Edwin Allen High School is one of the most versatile athletes at ‘Champs 2015’. Cameron who is in her final year had expressed to me in an interview her concerns of competing and recovering in the individual 200m and 400m events on the final day. She will now contest the sprint double (100m/200m) schedule for Friday and Saturday respectively, which will allow her more time to rest and conserve energy between finals over the last two days of the championship.

Despite her credentials, Cameron will not get any special favours from her competitors and will have to run the race of her life to win the gold medal. She has scarcely competed over 100m this season and her chance of medalling remains in the balance. However, there is no substitute for experience and Cameron could outfox the field in a pressure situation.

This will perhaps be the most competitive line-up of the sprints as all the athletes are running in the same time range this season. Additionally, most of the athletes mentioned, have been competing against each other for years swapping victories without any dominant individual having a clear advantage. Therefore, I believe this race will be so close that we might finally have a dead heat this year. 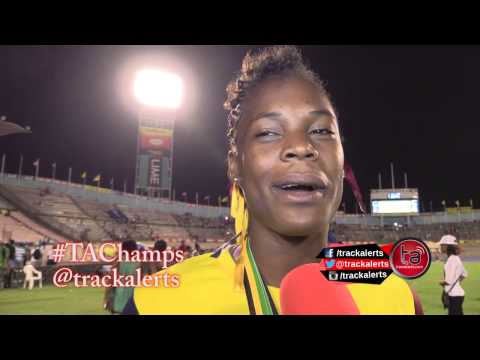