Jamaica’s Candice McLeod clocked the third fastest qualifying time to secure her spot in the final of the women’s 400 meters at the Oregon22 World Athletics Championships at the Hayward Field in Eugene, Oregon.

McLeod, who finished fifth in the event’s final at the Tokyo Summer Games last year, recorded a season’s best of 50.05 to claim the second automatic qualifying spot in the semi-final one. She held off Poland’s Anna Kietbasinska (50.65) to comfortably advance. Still, She had to settle for second behind the 2016 Rio Olympic Games champion, Shaunae Miller-Uibo of the Bahamas, who shaved off a chunk off her season’s best to clock a time of 49.55.

Meanwhile, her compatriot Stephanie-Ann McPherson, ranked number three in the world this year, had to settle for a non-automatic qualifying as she finished third in semi-final two in 50.56.

McLeod and McPherson will lineup in a high calibre final, which will include the likes of Bahamas’ Shaunae Miller-Uibo, Marileidy Paulino (49.98) and Fiordaliza Cofil of the Dominican Republic (50.14), Sada Williams of Barbados (50.12), Lieke Klaver of the Netherlands (50.18) and Poland’s Anna Kietbasinska (50.65) on Friday, July 22 at 9:15 pm Jamaica time.

In the men’s equivalent of the event, Christopher Taylor stormed to a season’s best of 44.97 to punch his ticket to his second senior 400 meters final. He advanced as the eighth fastest qualifier. However, his compatriot Nathon Allen, pulled up in his respective semi-final and will not make an appearance in the final.

This will be Taylor’s second senior 400m final as he graced the track in the final of the event at the Tokyo Olympics last year, in which he finished sixth in a personal best of 44.97.

Additional events contested on Day 6 of the Oregon World Championships:

Women’s 400M Hurdles- 2019 World Championships bronze medal winner, Rushell Clayton, will be Jamaica’s lone representative in the final. In addition, she clocked a personal best of 53.63 to book her spot in the final.

Meanwhile, her fellow countrywomen, Shiann Salmon (54.16) and Janieve Russell (54.66), failed to advance to the medal round of the event.

Men’s 800M- Jamaica’s record holder and national champion, Navasky Anderson, had to settle for a seventh-place finish in heat three. He recorded a time of 1:48.37. As a result, Anderson will not advance to the event’s semi-finals. 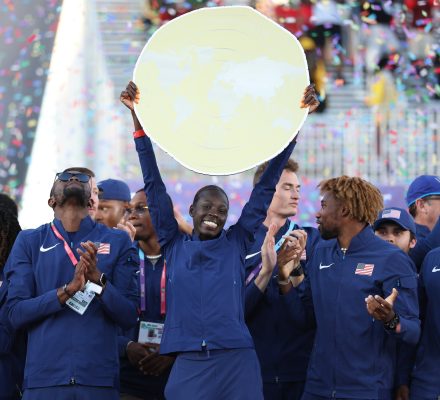