(05-Oct) — Organizers of the 2024 Paris Olympics unveiled the route of the Olympic Marathon today.  The near-loop course will begin at the Hotel de Ville on the north and east side of the Seine River, and end at the Esplanade des Invalides on the south and west side which is about three kilometers away.

In between, the athletes will run south and west to Versailles before turning around to return using different roadways.  In all, the course will pass through nine communities: Paris, Boulogne-Billancourt, Sevres, Ville D’Avray, Versailles, Viroflay, Chaville, Meudon, and Issy-Les-Moulineaux.

“Beyond a doubt, the Paris 2024 marathon will have something special about it,” said two-time Olympic Marathon champion and world record holder Eliud Kipchoge through a statement.  “To perform in such an impressive setting, in a place so charged with history and symbolism, will be a unique experience. I could not ask for a more perfect race for the Games.”

The route was inspired by the Women’s March of 1789, paying tribute to “those who made France the country of human rights and who defended the values of humanity and freedom,” event organizers said.  They continued: “The route, with its historical foundations, also reflects our constant desire to bring sport to the heart of the city. It combines sporting performance with an exceptional cultural and architectural heritage, and to open the Games to different territories.”

The race will pass some of Paris’s most recognizable landmarks, including the Place Vendôme, the Louvre, the Place de la Concorde, the Château de Versailles and the Eiffel Tower.

“The Paris 2024 Olympic Marathon will be a festive and remarkable moment in history,” remarked Paris mayor Anne Hidalgo.  “From the City Hall to Versailles, runners will be celebrated and cheered as they follow in the footsteps of the women who set out on October 5, 1789, to express their anger to the King.”

The course won’t be easy, however.  In something of a push-back against the trend towards flatter and faster courses, the Olympic Marathon will vary in elevation from a low point of 27 meters (at 14.2 km) and a high point of 183 meters (at 20.3 km).  In all, the race will gain 438 meters in elevation, and descend nearly as much, 436 meters to the finish.  The maximum grade is 13.5%.

“In this exceptional setting, the athletes will also take on a sporting challenge of unprecedented difficulty thanks to a tough course with significant
climbs,” said Paris 2024 president Tony Estanguet.

The 2024 Olympic Marathons will be held on back-to-back days, August 10 and 11, with the men competing first.  The World Athletics target for full fields is 80 men and 80 women.  That was also the target for Sapporo in 2021, but the men’s race ended up with 106 starters and the women’s with 88.

Organizers also announced that mass races will also be held at both the marathon distance and at 10 kilometers.  About 20,000 runners will be allowed to compete at each distance.

There will be ticketed seating for over 7000 spectators at the Esplanade des Invalides.  Those tickets are priced at EUR 24. 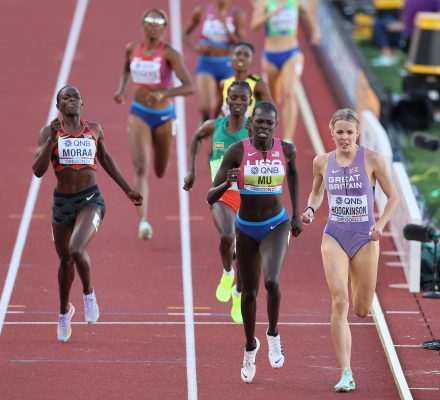